Rory McIlroy fired two superb eagles over the closing three holes at Royal Liverpool to place him in a formidable position at the Open Championship with a six stroke lead over Rickie Fowler moving into the final round.

McIlroy is at 16-under-par after a third round 68 to add to his opening rounds of 66-66. McIlroy’s three round total is just two outside the tournament record. 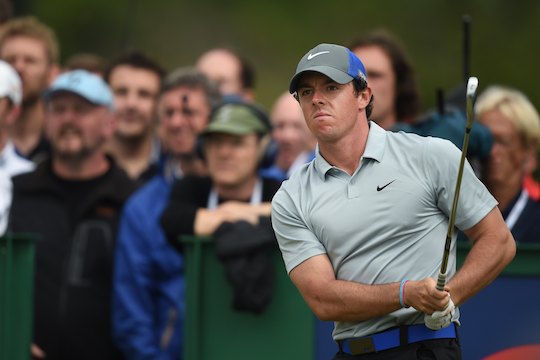 It was a day on when the mother of all storms, which was supposed to hit Royal Liverpool Golf Club, never arrived. Instead, it was McIlroy who demolished the field. He has claimed his previous two majors by an eight-shot margin, only Woods has won an Open with such a buffer when he was 18-under at Hoylake eight years ago.

Still just 25, McIlroy heads into the final day the firm favourite for another title. Should McIlroy win The Open that will leave him one short of the major slam – The Masters title the only missing. He won the US Open at Congressional Country Club in 2011 and the PGA Championship at Kiawah Island in 2012.

McIlroy, who started the round with a four-stroke advantage, looked in total control during his third round despite a wobbly start.

A birdie on 14th and an eagle on 16th cemented the foundations for a solid score. Then after finishing the 17th with a bogey, he nailed a 5-iron from 237 yards into heart of the 18th green, then sank an 11-foot putt for another eagle.

“Obviously, the finish speaks for itself; I was just sort of waiting for those two holes,” McIlroy said of the par-5 16th and par-5 18th.

Tiger Woods, who dominated those same holes on his way to the title here in 2006, has struggled in his return to major golf after back surgery. On Saturday, he shot a 73 and, at three over par for the tournament, is 19 shots off the lead.

Adam Scott rebounded nicely with a 69 after Friday’s 75, and is in 7th position at 6-under, ten strokes from McIlroy.

Marc Leishman is at 5-under in a share of 12th to be the next best Aussie.