In the hometown of legendary Muhammad Ali, the final round of golf’s season-ending Major turned into slugging match among four of the world’s top players. 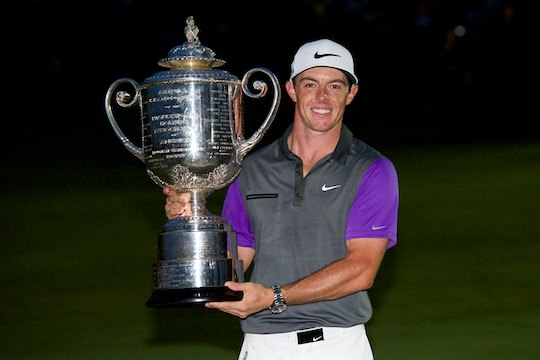 But it was the 25-year old McIlroy who was the last man standing in a dramatic last day trading punch for punch before knocking out five-time Major winner Phil Mickelson, reigning European and PGA Tour number one Henrik Stenson and also Ryder Cup rival Rickie Fowler.

McIlroy now joins ‘Young’ Tom Morris, Jack Nicklaus and Tiger Woods as the youngest player to win four Majors in posting a final round 68 to win by a shot with a 16-under par victory tally in near darkness on the Valhalla course.

But then with the light fading quickly, and in a further twist to the last round drama both Mickelson and Fowler, who were in the group ahead, moved to the side of the 18th to allow McIlroy and Bernd Wiesberger play their final drives and avoid a Monday restart.

However Mickelson was far from pleased with the decision and also then in allowing McIlroy and Wiesberger to play their second shots.

McIlroy had gone into the last day leading by one stroke but after dropping a shot at three, McIlroy found himself in a five-way tie at the top alongside Mickelson, Stenson, Fowler and the Austrian Wiesberger.

But then when McIlroy found a greenside bunker at six and then missing a six footer he was then two shots behind Stenson and Fowler.

However McIlroy bounced back holing a seven-footer at seven and then muscled his way back into a three-way share of the lead at 14-under par in playing the then shot of his round, a 281-yard second shot to just seven feet at the par five 10th hole, and then sinking the putt for eagle.

Less than two minutes later Mickelson and Fowler, playing in the group ahead, each went to 15-under par before Stenson joined the pair in birding the 13th.

And while McIlroy missed birdie putts of 10 feet at the 11th and seven feet at the next his patience reaped dividends when Fowler missed the green left at 14 for bogey and Mickelson made a mess of 16.

McIlroy, and as he had done all week, stamped his enormous class over the closing few holes sinking birdie putts at 16 and 17 to head up the last two clear of his rivals.

And with the knowledge of being four under par over three days playing the last, McIlroy then two-putting the last from a greenside bunker and win also second PGA Championship.

Stenson then threw away becoming the first Swede to win a Major with a bogey on 14 but then had spectators ducking for cover in playing a wild second shot left into the last on route to a par and a 14-under par tally.

Mickelson’s charge to a sixth Major ended, despite nearly chipping in for eagle at 18, with a round of 66 to finish on 15-under par.