Rory McIlroy is excited by the thought of Tiger Woods returning to golf at next week’s Masters.

And he’s not alone. The sight of Woods’s private jet, registered N517TW, touching down on Tuesday at Augusta Regional Airport has got the entire golf world on the edge of their seats. 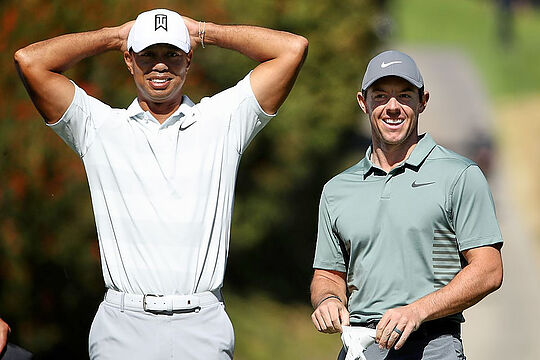 It was only last December that Woods formally returned to tournament play riding around in a motorised cart when he teamed with his son, Charlie, and went so close to victory at the PNC Challenge in Orlando.

However, it’s been some 18 months since Woods last ‘walked’ a course in competition and that was in the defence of his 2019 Masters title, which due to COVID, was held in November 2020. Woods played all four rounds but a final day 76 saw him finish just inside the top-40.

After being seen practicing at Augusta National on Tuesday, speculation is now rife that while Woods will be certainly be attending the annual Past Champions Dinner, he could now be teeing up in what would be his 24th Masters appearance.

“I think for golf and for the Masters tournament and for everyone, to have Tiger there would be phenomenal. I think it just adds to the event”, said McIlroy. “Obviously, it does as anything Tiger Woods does in the game of golf is heightened whenever he’s there.”

“I mean, it would be awesome for him to be there. You know, he was there yesterday obviously and he’s trying to see what he can do. Obviously, no one knows but him if he can make it around and think, you know if he believes he can compete.”

But those that follow the game closely cannot be surprised at anything Woods can achieve in coming back from adversity, as we vividly recall what dramatically unfolded on the 14th of April 2019 when Woods was fitted with a fifth Masters green jacket, and in capturing Major Championship number fifteen.

And you’ll get no argument from McIlroy.

“I’ve said this so many times, but from basically March of 2017 fast forward two years and he wins the Masters and where he was with his body and what he had to do to get back to being somewhat healthy,” said McIlroy.

“And it’s not even being somewhat healthy, it’s also what he has to do before the round and after the round just to get himself ready to go and play golf. Yeah, the sheer will and perseverance…is incredible.”