McIlroy gets over first Grand Slam hurdle with 71

World No. 1 Rory McIlroy got over the first hurdle in his quest for a career Grand Slam in posting a one under par 71 on the opening day of the Masters.

Going back to 2000 there’s just been one player not to break par on the first day before being fitted with an Augusta green jacket. 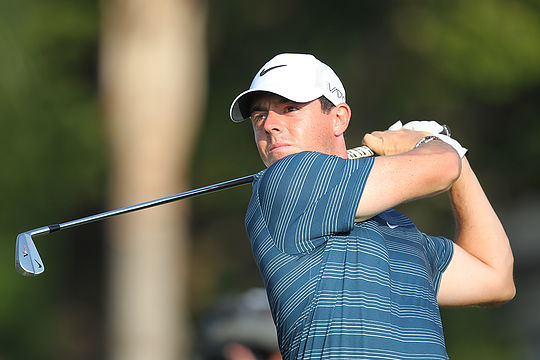 That was Tiger Woods in shooting a 74 en route to victory in 2005.On every other occasion a Masters winner has broken par.

McIlroy did that with a mix of three birdies and two bogeys in what was steamy conditions early in round before the wind got up appreciably over the closing handful of holes.

But then it could have easily been three bogeys after McIlroy somehow saved par early in his round at the second hole when he had to take penalty drop from a hidden creek located well inside the tree line down the left side of ‘Pink Dogwood’.

“It wasn’t what I wanted to do off the second tee but I managed to save five there which was important,” said McIlroy.

“Overall, I felt I played okay today and it was good just to get day one over and done with. I just kept telling myself to be patient out there today.”

“It was a tricky day with the wind swirling a little bit and with some tough pin positions so anything under par today I felt was a pretty good score.”

In fact, after taking bogey at the par three sixth hole, McIlroy birdied the par four seventh, dropped a shot at the par four 11th but played the two back nine par fives, 13 and 15, in two under par.

A year ago, McIlroy was level par over four rounds on the 16 pars fives while Bubba Watson captured a second Masters title in three years playing the par fives in eight under par.

So McIlroy’s already put a good foot forward in being two under par on four of the par fives.

“It would be fair to say that today was one of those rounds that could have easily turned into a 77 but given my experience now I managed to get it in round in 71,” he said.

“After that second bogey at 11 it could have got away from me but again I just stayed patient and realising to myself that it is a 72-hole golf tournament and I don’t have to press too much.”

“So it was what is was and it was good to get into red numbers on day one.”

“I feel as good as I am driving the ball that if I keep doing that and be a little bit more efficient with my iron play and give myself a little bit more opportunities I hope to be right there at the end of the week.”

McIlroy ended his round just prior to 4pm local time and sharing 16th place and just four strokes behind the leading clubhouse pair of Charley Hoffman and Justin Rose.

However just prior to McIlroy holing out there was a huge roar from the par five eight hole with in-form American sensation Jordan Spieth who birdied the eighth hole and then moving to five under par with birdies at nine and 10.

Tiger Woods, competing in his first tournament in two months, sent his opening drive into the trees right of the first in taking bogey.

The four-time Masters winner birdied the next but a bogey and made the turn at one over par.

Each of McIlroy’s four Major victories have been on courses that have played slow due to rain taking the fire from them, making the greens more receptive to iron shots.

“A firm and fast Augusta or a typical U.S. Open set-up is probably the best for me,” said McIlroy ahead of teeing off.

“It requires so much discipline and precision, and that’s something I’m still learning.”

However on arriving at Augusta, McIlroy had played in just three PGA Tour events and having broken 70 just one in nine rounds and that was a second round 66 in Arnold Palmer’s Bay Hill tournament.

Earlier in the week Gary Player remarked the word ‘superstar’ is thrown around too freely these days in golf. The South African believes a player must have won six Majors to be considered a ‘superstar’.

Player won nine and if McIlroy were to win this week, he would have five.

But then if McIlroy does win he would join Player, Jack Nicklaus, Gene Sarazen, Ben Hogan and Tiger Woods in golf’s elite ‘Grand Slam Club’.

“Would that be good enough Mr. Player for McIlroy to be considered a ‘superstar’?

“Well, I think you always have to make exceptions in everything you say, so if a man wins the Grand Slam, he’s a superstar,” said Player.

Masters Winners Since 2000 – First Round Scores