McIlroy goes from zero to hero with Bay Hill win

Rory McIlroy has turned around a frustrating 18-month long winless drought after birdieing five of his closing six holes to claim the $8.9 million Arnold Palmer Invitational at Bay Hill in Orlando.

The 28-year-old signed for a 64 to take the title by three strokes on 18-under – equalling his lowest score on the PGA Tour since last June at the Travelers Championship.

The win marks McIlroy’s 14th PGA Tour title and the 23rd title of his pro career.

“I had so much fun out there today being in contention and being in the mix on the back nine and producing the sort of golf I produced over those last few holes was just so pleasing and I’m just really proud of myself,” he said. 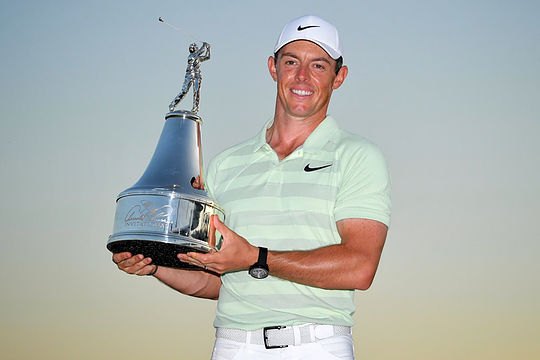 McIlroy opened his account with five pars but it was at the par-5 6th hole where his stunning run really began.

He birdied the 6th, 7th and 9th holes before making the turn and then grabbed another four birdies in succession from the 13th hole before putting the nail in the coffin with a 25-foot birdie putt to move two ahead of Bryson DeChambeau at that stage.

Needing an unlikely eagle at the 18th, DeChambeau made bogey after firing his second shot into the bunker behind the 18th green for a round of 68 and a 15-under total for outright second.

Justin Rose fired a 67 to finish at 14-under while Henrik Stenson faded across the weekend with a pair of 71′s following his opening 64 to close the tournament in outright fourth at 13-under.

Rose has now finished in the top 5 four times this season including a win at the World Golf Championships-HSBC Champions in October last year. He will surely be well in contention again at this year’s Masters.

McIlroy will move back inside the world’s top-10 as he heads to this week’s WGC – Dell Technologies MatchPlay Championship in Texas before taking a week off prior to teeing it up at the Masters, where he will be looking for his first green jacket.

Tiger Woods continued his amazing return to form shooting back-to-back 69′s on the weekend to share 5th place with Ryan Moore at 10-under. Woods fired off six birdies but gave back another three shots with bogeys at the 9th, 16th and 17th holes.

“To be in contention, if you would of asked me at the beginning of the year that I would have had a chance to win two golf tournaments, I would have taken that in a heart beat,” said Woods.

“If I can play with no pain and I can feel like I can make golf swings I’ll figure it out. I’m starting to piece it together tournament by tournament and each tournament’s gotten a little crisper and a little bit better.”

“I’m looking forward to it (the Masters). I miss playing there, I’ve been there for the dinner and as great as that is, it’s frustrating knowing that I’m, I would have to say, young enough to play the event, where some of the other champions are not, and I just have not been able to physically do it, which is difficult.”

“I’ve had a lot of success there, too, so really looking forward to getting up there and doing a bit of work and getting a feel for the golf course and basically feel for playing that style of golf again.”

Marc Leishman quietly moved up 28 places on the final day to finish in a share of 7th with a final round 67. Jason Day shared 22nd place with an even-par round of 72 followed by Adam Scott (T41) and Curtis Luck (T58).