McIlroy ‘gutted’ about long drive loss to An

It is not too often Rory McIlroy gets ‘relegated’ when it comes to driving the golf ball.

Hours and hours spent in the gym have Rory hitting the ball further than ever and he is now recognised as one of the longest hitters in world golf. 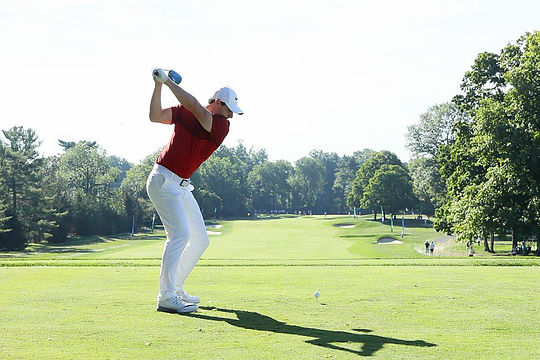 Yet the Northern Irish star had to take a back seat when Korea’s Byeong Hun An banged one past him in a long-drive contest that was part of last weekend’s US PGA Championship at Baltusrol.

Every player in the field had the chance to hit one tee shot on the first hole at Baltusrol on the Tuesday before the event began, with the distance measured as long as the ball finished on the fairway.

McIlroy set the benchmark with a 345-yard (315m) drive early in the morning and he looked set to win the gold money clip and a $25,000 donation to a charity of his choice…until An came along and beat him by two yards.

“That would have been a mini victory this week and I hit mine at half-past eight this morning when there was no wind.

“I pulled it a little bit, so I was a little concerned it might just miss the fairway left, but it just hung on.

“I’m not going to lie to you, I’ve been checking the board since to see if anyone’s got close to me.

“I saw Gary Woodland on the putting green just as he was going out and I said that’s one of the guys I’m worried about.

“I thought he could maybe get it out there by me. But he missed the fairway, thankfully.

“It’s a cool concept. It’s a lot of fun and I think the guys enjoy it.”

It wasn’t all bad news as McIlroy had to settle for a silver money clip and a $15,000 donation, with Belgium’s Nicolas Colsaerts winning a bronze clip and $10,000 for third after a drive of 341 yards.

Incidentally, McIlroy’s week didn’t get any better when he also missed the halfway cut at the PGA – by a mere stroke.