McIlroy humbled by huge outpouring of support at Open

Rory McIlroy’s touched down in Memphis for this week’s WGC – FedEx St. Jude Invitational revealing he was overwhelmed by the home support at last week’s Open Championship, where he missed the cut by a stroke.

He spoke in Memphis how the Irish support became all too much for the four-time Major winner. 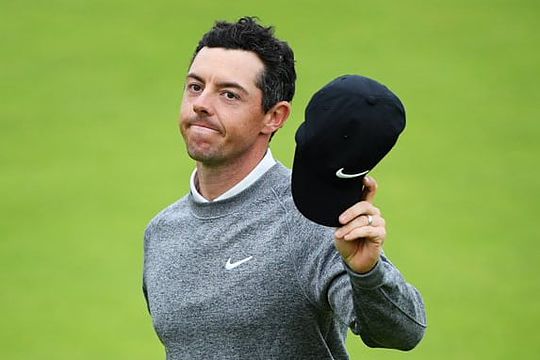 Rory McIlroy waves to the crowd after the missing the cut (Credit: European Tour)

“I have spent the last three days unpacking boxes and moving into a new house, so I haven’t touched a club since last Friday,” he said.

“In looking back on last week, it hit home where I stood in terms of the people in my home country, and that is what was overwhelming for me.”

“On Thursday in being announced on the first tee I reached down to put my tee in the ground and my hand was shaking, and I said: ‘Gees, this is different.”

“So, I was surprised how nervous I was and how rapidly it came on.”

“Then come Friday, it wasn’t the fact I didn’t cry because I missed the cut but more so I was overwhelmed by the support I got. I guess at the end of the day I didn’t think I meant as much to them and I realised they mean more to me than I thought they did.”

“It went both ways and that was really nice, and I had to stop myself from crying about four times on the back nine and not because of the situation I found myself in but just because of the support.”

“It sounded like Sunday in terms of trying to win the golf tournament and just had to take a step back and think ‘woh’ that I mean a lot to these people.”

“Selfishly, and I said this afterwards, but I would have loved to have played in that atmosphere for two more days and it is such a weird thing to say but to think about a missed cut to be one of the best experiences you’ve ever had on a golf course.”

“I was emotional on Friday and sometimes a bit of emotion on the course is not a bad thing and it’s about how you handle it while the standing ovations I was getting on the greens was when it really hit me.”

“So, I guess there is some sort of silver lining in there somewhere.”

McIlroy disclosed also it was Shane Lowry who texted first and that was on Friday night after McIlroy was assured of missing the last two rounds.

“Shane texted me on Friday night and gave me a few words of encouragement after I missed the cut and he said to me I will see you in Memphis, and I said I hope I don’t see you because you will be still drinking out of the Claret Jug,” said McIlroy

McIlroy indicated also he and his wife, Erica will join Lowry and his wife, Wendy for a celebratory dinner in New York City earlier next month during the week of the Northern Trust.

This week’s $10.25m event in Memphis is the penultimate event on the regular PGA Tour season ahead of the first of the three Play-Off events commencing on 8th August.