After seven long years since his last major championship triumph, Rory McIlroy has ignited hopes of glory at the game’s highest level with a gutsy five-under par 65 on the opening of the PGA Championship in Tulsa, Oklahoma.

McIlroy’s score was his lowest PGA Championship opener since a first round 66 en route to victory at the 2014 PGA Championship at Valhalla in Kentucky. It was also the first occasion that McIlroy has broken 70 on the opening day of the PGA Championship since that 2014 win in near darkness in suburban Louisville.

The current World No. 7 easily upstaged playing partners Tiger Woods, who was clearly struggling with his leg in posting a 76, and Jordan Speith, who signed for a 72, and just four days after the Texan finished runner-up at 25-under in the birdie blitz that was the AT&T Bryon Nelson. 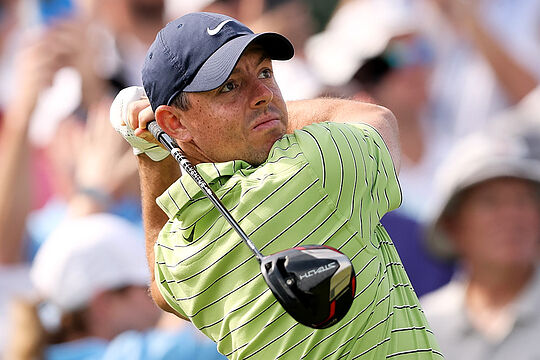 McIlroy superbly capped a 51st round of his 14th PGA Championship with four birdies in succession from his third hole or the 12th on the scorecard, and then played his inward nine with three further birdies matched by a pair of bogeys.

“It was a great start to the tournament,” said McIlroy. “I’ve been playing well coming in here. I’ve been carrying some good form. Obviously, that took a lot from that last round at Augusta, played well up in D.C. at the Wells Fargo there, and played well in the practice rounds earlier this week.”

“I feel like this course, it lets you be pretty aggressive off the tee if you want to be, so I hit quite a lot of drivers out there and took advantage of my length and finished that off with some nice iron play and some nice putting.”

Woods, contesting only his second event of the new season, had been two-under after five holes but that proved to be the highwater mark of his round, as he finished in a 15-way tie for 99th place alongside the likes of Sebastian Munoz, who finished in a share at last week’s AT&T Byron Nelson.

Indeed, the 15-time major champ struggled for most of the day and appeared to be in pain following a tee shot on the par-3 eighth, but he managed to finish his opening round. He ended the day by hitting a tree off the tee, leaving 190 yards to the green on the final hole.

“My leg is not feeling as good as I’d like it to be,” Woods said. ” It has felt better before. It’s a little sore right now, and we’ll go back and start the process of getting ready for tomorrow.”

Spieth also had some struggles on the course Thursday but finished 2-over 72. He couldn’t make a putt early in the round but had a nice putt at the last hole to end the day with a par.

Cameron Smith and Lucas Herbert lead the way for the Australians three strokes off the pace on 2-under and sharing equal 7th place.

“I really like the golf course. I hit my driver really good today, which freed me up into the greens, and was able to make a few birdies there on the back nine,” said Smith who rescued a poor opening nine holes with five birdies in the space of seven holes on his back nine.