In a huge surprise and a shock to the golfing world, Rory McIlroy has revealed he could be forced out of this week’s Tour Championship due to the birth of a first child.

McIlroy, 31, confirmed that his 33-year old wife, Erica is expecting a girl with the McIlroy’s having kept the news from all but family members and the closest of friends. 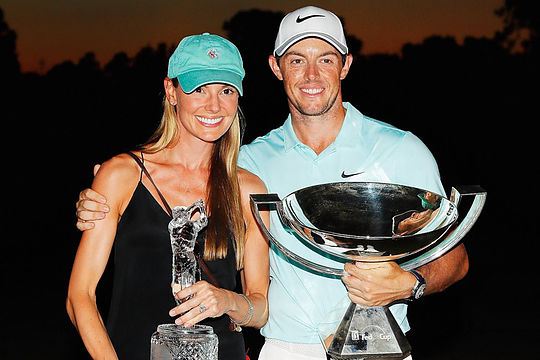 The couple were married at a lavish reception at Ashworth Castle in Co. Mayo Ireland in 2017.

This website did hear rumours some weeks ago Erica was pregnant and with approaches made to McIlroy’s management team but without the courtesy of a reply.

However, while it’s been known she was pregnant what was not known that the baby is ‘due any day now’ as McIlroy confirmed following his third round of the BMW Championship.

As such, it means Erica McIlroy has been pregnant since the end of last year.

“She is, yes,” was McIlroy’s response is asked to confirm the news.

“We’re about to be parents very soon, so we’re obviously super excited. Yeah, we’ve been sharing the news with friends and family, obviously, but I didn’t think it was something that I really particularly needed to share out here. It’s a private matter, but we’re really excited and can’t wait for her to get here.”

And if McIlroy gets the call next week, and if the arrival of the baby is as predicted, then McIlroy will miss the defence of his Tour Championship and FedEx Cup titles.

But that doesn’t worry McIlroy the slightest.

“If the baby arrives next week, yeah for sure I will not be playing in the Tour Championship,” he said.

“Yeah, definitely, just depending on what happens. I’m going to play in many more Tour Championships and it’s only going to be the birth of your first child once. That trumps anything else.”