McIlroy kicks off season-ender with 66

World number one Rory McIlroy ended a six-week competition absence shooting a six under par 66 to share the lead on the first day of the season-ending DP World Tour Championship.

McIlroy birdied four of his opening five holes and then two of the last four to join fellow Irishman and close friend Shane Lowry atop of the board in the $US 8m event on the Earth Course at Jumeriah Estates Resort. 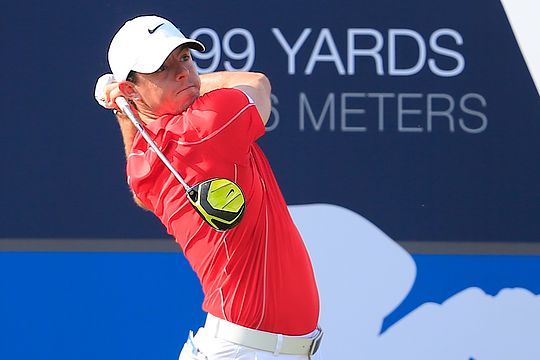 Rory McIlroy tees off during round one of the DP World Tour Championship (Credit: www.golffile.ie)

The four-time Major winner is now an amazing 80-under par for 21 rounds of the Dubai course including birding the closing five holes to capture the 2012 event and a first European No. 1 title.

“The way I played it should have been five birdies in the first five holes,” he said.

“It was a great way to start. You never expect to start like that, but I’ve been hitting the ball well for the last couple of weeks that I’ve been practicing and it was just a matter of trying to take that good range play on to the course, and I was able to do that today, which I’m really happy about

McIlroy has been in Dubai for the better part of two weeks electing not to contest any of the opening three events on the Tour’s Final Four Series.

He has travelled to contest the made-for-TV Grand Slam of Golf in Bermuda but his Dubai round is a first competitive Tour effort since shooting a final round 68 to share second place earlier last month in the Alfred Dunhill Links Championship.

“I played the two days at the PGA Grand Slam but I wouldn’t really call that competitive,” he said.

“So the last shot that I hit was St. Andrews I guess, was my last competitive shot. So I was really looking forward to just getting out there and feeling what it was like again. Yeah, I was excited.”

Lowry arrived in Dubai disappointed to have finished well down in 25th place in last week’s Turkish Airlines Open after having been among seven players tied for the lead after just four holes.

However Lowry’s big goal, apart from a third Tour victory, is to break into the world’s top-50 and a task that has become increasingly frustrating in recent weeks.

The Dubliner had moved up to 51st last week ahead of the Turkish event but this week finds himself back to 52nd as he seeks to end the year being exempt into all four Majors in 2015 including the assurance of a first Masters invitation.

“Last Sunday was a very difficult day for me as for the last 12 holes I couldn’t wait to get off the golf course and come here to Dubai,” he said.

“Once I got here on Monday, I was fine as I had put myself into contention which is a positive I can look at from last week,” said Lowry.

“I’m just looking to give myself the same chance this week and maybe I won’t mess it up.

“Of course, my World Ranking situation has been an issue for a while. It’s been playing on my mind.

“But then I just sat down with my coach this week. He’s here with me this week and we said to each other, just try and go out and play well and let everything else take care of itself.

“Thankfully that’s what I did today so far and hopefully I have three more days of it.”

Sweden’s Henrik Stenson, who played alongside McIlroy and his closest rival on the Race to Dubai money list, birdied his last hole in a round of 68 to share fifth place.

One of the biggest disappointments on the first day of the last event of the year was American Brooks Koepka.

Last Sunday’s Turkish Airlines Open winner slumped to last place in the in the elite 60-player field with a round of 78 that included six bogeys.