Rory McIlroy has labelled his first Australian Open in seven years as ‘wasteful’ after an indifferent display with the putter on day one of the event at Royal Sydney.

Just when McIlroy has the Nike honed in, it was the shortest club in the bag causing the most concern as he had three three-putts and missed a number of genuine birdie chances in a three under par 69. 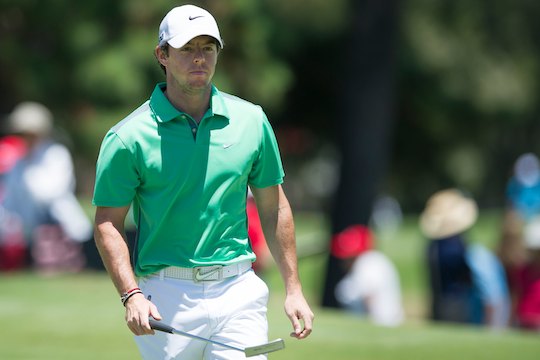 It left the current World No. 6 trailing nine shots behind Australia’s Adam Scott who shot a new course record of a 10-under par 62 and three strokes fewer than the previous low set by five players in the 2008 Australian Open.

Canadian Ryan Yip is in second place at seven under par and then being joined near 7pm local time by American-born Korean John Young Kim who was out in the very last group of the day to match Yip’s round of 65.

Rory and JP 1st round 2013 Australian OpenAustralia’s David McKenzie is fourth with a round of a six under par 66.

But while Scott needed just 24 putts, McIlroy used the putter on 29 occasions.

“I drove the ball pretty well off the tee but just didn’t get any reward on the greens,” he said.

“I missed three short ones and that was just wasteful as I felt it could have been a lot lower given that I am driving the ball the best I feel I ever had.

“It’s just a matter of being more efficient and putting better, and that’s really it as I only played the par fives in one under par and the way I am driving it, I should be playing those in four under.”

McIlroy was two under par with birdies at the second and sixth hole but then dropped two shots in two holes from the 10th before birdies at 12 and 14 got him back to two under par.

But after finding the front edge of the green at the par five 16th he chipped up to just two feet and missed the birdie opportunity before managing to hole a four-footer on the final green.

The double Major Champion was enjoying a late breakfast at his Sydney hotel when he watched TV coverage of Scott racing to six under par after just six holes.

“I was sitting over breakfast and noticed he had birdied the first six holes, so to shoot a 62 around here is great going,” said McIlroy.

“So I guess when you see someone has shot 10-under par, and especially when it is Adam Scott at the top, I just felt I was standing in neutral gear even though I shot three under.

“It is hard to give Adam Scott a seven shot lead with three rounds to go.”