McIlroy leads, Day one shot back at PGA

Jason Day fired his career low score in a major with a Saturday 65 at the PGA Championship to move within one stroke of championship leader, Rory McIlroy.

Day is currently at 8-under-par after rounds of 69-65 and will be paired with the world number one tomorrow. 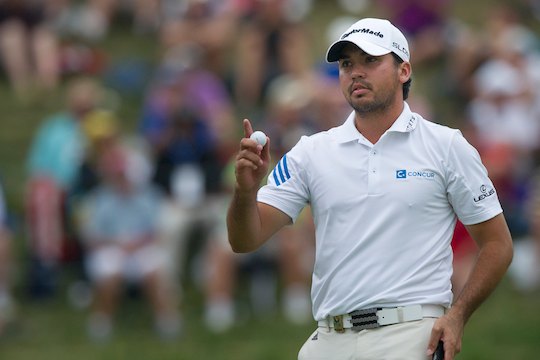 Jason Day fired second round 6-under 65 to be one behind Rory McIIroy moving into the third round of the PGA Championship at Valhalla (Credit: Anthony Powter)

“I’m excited,” said Day following today’s round which was delayed by 50 minutes due to storms.

“You can’t not be excited to be in or around the lead in a major championship. Obviously, they are the hardest tournaments to win. But I’m looking forward to it.”

Day has been in this position in the majors on numerous occasions and is certain to draw from past near misses.

A runner-up finish at the 2011 Masters, and a two-time runner-up at the US Open are included in his seven top-10 finishes in the majors. Despite past experiences, Day admits that he still feels the tingles when moving into contention at the majors.

“Some people can handle it, some can’t. It’s ok to feel uncomfortable. I just got to go out there and just embrace being uncomfortable again, and just really play my own game and not think about anyone else.”

At present Rory McIlroy remains the tournament favourite. The Northern Irishman has played fearless golf yet again this week.

McIlroy opened with rounds of 66-67 to hold the midway lead and is looking at back-to-back major wins following his victory at the Open Championship last month at Royal Liverpool.

“Conditions were obviously a little tougher than they were yesterday, you needed to stay patient, because the rain was coming down pretty heavy at times.”

Despite exquisite ball striking and laser finding approach shots on soft greens, McIlroy remains coy about the prospect of winning a consecutive major.

“I can’t control what other people do. I expect to execute my shots. I expect to do the things I can control.”

Day on the other hand knows a task is ahead if he’s to overtake McIlroy.

“I’m clearly not the favourite,” Day said. “This whole year, he’s been playing great. He [McIlroy] looks confident. He’s hitting the ball longer and straighter than pretty much everyone in the field. It’s going to be tough to beat him.”

But at the same time Day has developed into an experienced exponent at the majors.

He’s due for a win and his game today, which included an eagle and five birdies, and an opening nine of 5-under-par 30, was nothing short of impressive.

“That’s obviously the last thing that I expected to shoot 30 on the front nine. But you know, I put some good shots together out there today to give myself the opportunities out there.”

Matt Jones is the next best Australian in a tie for 17th at 3-under, followed by Geoff Ogilvy at 2-under to be in a share of 26th along with Adam Scott.

Marc Leishman was the last Aussie to make the weekend finishing on the 1-over cut mark.

Tiger Woods’ week came to an abrupt end today following back to back rounds of 74 to miss just his fourth cut in a major and finish at 6 over at Valhalla Golf Club.