McIlroy leaves family in US ahead of European swing

It’s been previously reported that there could be boycott by some American-born golfers in withdrawing from next fortnight’s Open Championship due to far stricter entry conditions into European tournaments.

Rory McIlroy knows just how strict those conditions are in revealing the reasons why his wife and young daughter did not travel with him to this week’s Dubai Duty Free Irish Open. 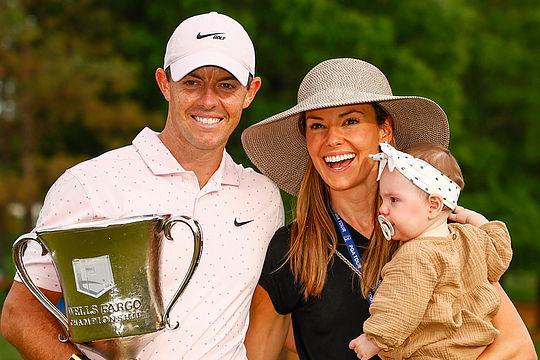 McIlroy jetted into Dublin Airport at 5am local time Tuesday in readiness for this week’s Rolex Series event at Mount Juliet in County Kilkenny.

The four-time major winner initially intended for his family to travel direct from Florida to Dublin but instead their private jet headed to upstate New York where McIlroy’s wife, Erica and young daughter, Poppy deplaned and were met his wife’s parents before McIlroy and caddy, Harry Diamond continued across the Atlantic to arrive in Dublin.

And it now has come to light why McIlroy was a late entry into next week’s Scottish Open given his desire not to put his wife and child through the strict conditions in entering Ireland and also in competing on the European Tour.

“My original plan was to play here, take a week off, that week in between which is now The Scottish Open and then play The Open.”

“But just with travel restrictions and obviously with me being exempt as a sports person and the restrictions not maybe being as heavy as they would be for Erica and Poppy, for example, I just felt like it wasn’t fair to put them through what they would have to go through to be here with me.”

“So plans changed very quickly. We made the decision that I would travel on my own, and because I just — I mean, I wasn’t going to go back to the States for one week in between the Irish and The Open.”

“I thought if I’m here, I might as well play the Scottish. So it sort of went quickly from them coming to them not coming, and then me playing three events in a row”.

Despite the disappointment of having to wave goodbye to his family for the next three weeks, McIlroy indicated the process of arriving back into Ireland was quite straightforward.”

“I just took a PCR test within 48 hours of flying. I dropped the girls up in New York with Erica’s parents, and then I flew on from there so it wasn’t particularly difficult,” he said.

“Yeah, it actually hasn’t been too bad at all. Because I took a COVID test 48 hours prior — within 48 hours of flying, I didn’t need to take one after I landed in Ireland. Just came straight into the bubble, and actually it’s been pretty straightforward. It’s been quite nice.”