McIlroy looking for revenge on the Blue Monster

After being clawed a week ago at the ‘Bear Trap’, Rory McIlroy is looking to exact revenge on the ‘Blue Monster’ – the venue for this week’s WGC – Cadillac Championship.

McIlroy missed his first cut since last year’s Irish Open after posting scores of 73 and 74 at the Honda Classic. 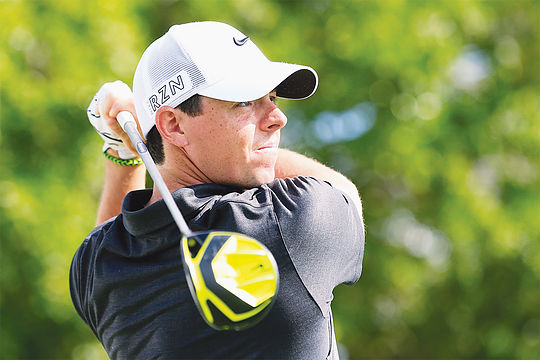 Rory McIlroy tees off during practice for this week’s Cadillac Championship (Credit: www.golffile.ie)

But then the four-time Major winning McIlroy believes it could be a ‘blessing in disguise’ not to have played all four rounds in an event, due to several storm delays, went through to finish near noon on Monday.

“I could have approached missing the cut last week in two ways,” said McIlroy.

“I could have got really down on myself and wondered where that had come from or thought this was the first event after a three-week break and there were things that need to be sharper.”

“Sometimes you need a little kick in the backside to make you realise what you need to do. I was disappointed but I feel like it has given me clarity on what I needed to do on my game going forward.”

“But then it was also my Mum’s birthday on the Friday night so we went out for a nice dinner and then got back to work on Saturday.”

And for a player who grew up in windswept Northern Ireland, and on some of the world’s greatest links venue, it came as somewhat as a surprise to hear McIlroy struggled in the wind last week on the east coast of Florida.

“Most of my troubles last week was to do with playing in the wind,” he admitted.

“I just wasn’t comfortable playing a few shots that I needed to play.”

However it’s another week and a new challenge and with McIlroy very focused in getting back towards the pointed end of a tournament, and in his second last PGA Tour event before heading to Augusta National.

“There is always excitement and anticipation and hype surrounding Augusta and I feel it regardless whether I am going in there as favourite or under the radar,” he said.

“It’s the first major of the year and really the start of the golfing season for the general public.”

“Right now I’m taking it week by week. After Bay Hill I will start to think about it more and every practice session will be looking ahead at the shots I need.”

“I think the best way to go in is to have confidence but sometimes if you go in with low expectations that can help as well. If things were to go the right way at Augusta I would not care if I had gone in there with two wins or two missed cuts.”

And organisers of this week’s $US 9.25m event have put the game’s top three players out together in the opening two rounds with McIlroy to partner World No. 2 Bubba Watson and World No. 3 Henrik Stenson.