World number two Rory McIlroy’s season-long struggles and his reservoirs of confidence withstood yet another blow with another big cut miss, shooting 79-75 for an ugly 12-over par total at The Open Championship at a flint, hard Muirfield links.

It was McIlroy’s fourth missed cut of the season and his second in succession following the disappointment of missing the weekend in his homeland at the Irish Open. 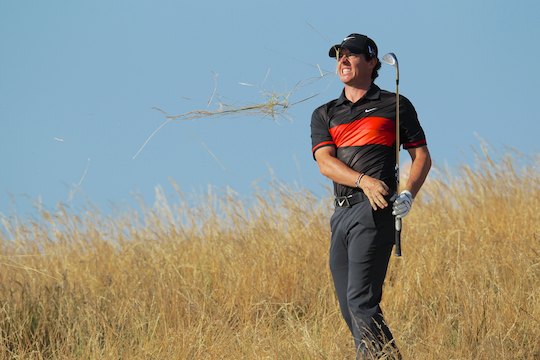 Rory McIlroy hits out of the rough at the 2013 Open Championship (Credit: Eoin Clarke/www.golffile.ie)

It’s commendable that McIlroy is trying to put on a brave face during the most trying year of his short career, recently adding a self-deprecating ‘Everywhere!!’ to his existing Twitter account profile (“I hit a little white ball around a field sometimes! Everywhere!!”) in a bid to break the tension, or perhaps, out of sheer exasperation as he searches for something even close to his best form.

“I don’t know if I can single out one thing,” McIlroy said on Friday, a day after admitting he had been playing ‘thoughtless, brain-dead golf’ for months, “I think it’s been a combination of things, to be honest.”

“Whenever you are swinging it well and you’re confident, you can take a couple of weeks off, go to the next event and play and you’re OK.”

“But I think when I’m struggling with my game, it’s better to play my way out of it and that’s something I haven’t really done this year. I’m looking forward to playing golf and playing tournaments and getting into a run of events.”

McIlroy admitted he played his second round with future big event events in mind, including his US PGA Championship defence at Oak Hill in a few week’s time.

“I was going to hit driver every hole that I could, because that’s going to be a big factor the next few weeks,” he added. “I actually drove the ball pretty well and ended up playing the last eleven holes under par.”

“That’s encouraging but obviously I’m disappointed to be going home for the weekend.”