Rory McIlroy has come from six shots behind firing a 6-under 65 for a two-shot victory in the Deutsche Bank Championship, the 20th worldwide victory of his career and his first this year on the PGA Tour.

It was 27-year-old McIlroy’s first tournament win since the Irish Open in May and first PGA title since May 2015. McIlroy finished the tournament at 15-under and moves back to No. 3 in the world.

“I am really proud of myself for battling that first day, getting some momentum on Saturday and just going with that. It is nice to get that first win in the States this year.”

“Hopefully this is momentum I can bring on to the next couple of weeks and ultimately the Ryder Cup to hopefully help Team Europe win another one of those. I’m really excited going into the last part of the season.” 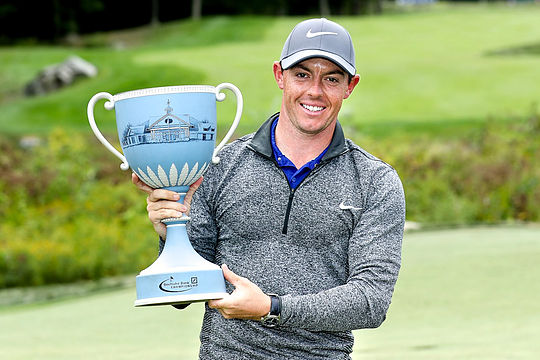 England’s Paul Casey, who began the final round with a three-shot lead in his bid for his first PGA Tour victory since 2009, closed with a 73.

Casey had a 60-foot eagle putt on the final hole that would have forced a playoff but missed. Casey’s runner-up finish did move him from No. 59 to No. 10 in the FedEx Cup points race, assuring him a spot in the Tour Championship for the first time since 2010.

US PGA Championship winner Jimmy Walker finished third on 12 under after a second successive 70 while Adam Scott ended the day with three straight birdies to match McIlroy’s 65 and take fourth place on 11 under.

Scott, ranked 6 in the world, fired a sizzling final round 65, jumping 19 places to finish four strokes behind McIlroy. Scott closed out the front nine with three straight birdies to take the lead and got up-and-down from a bunker for birdie on the final hole in a pure display of precision golf.

Jason Day, finished in a tie for 15th in a rocky week off-course with his family involved in a car accident in Boston. No one was injured but the events certainly hit the World Number 1 and slowed his momentum for the tournament.

Marc Leishman finished in a tie for 46th position at 3-under and is set to move to the next stage of the series.

The top 70 advance to the BMW Championship, which starts Thursday at Crooked Stick in Indiana where the field will be reduced to 30 for the Tour Championship on 22-25 September.

Any player who enters the TOUR Championship ranked fifth or better in the FedExCup can with the $10 million bonus with a victory in the season ender.

Jason Day (2nd) and Adam Scott (5th) are in with a chance to collect the bounty, whilst Aaron Baddeley (67th) and Marc Leishman (70th) remain in the mix for a solid season ending pay cheque.