Rory McIlroy mesmerised his rivals with two eagles and an equal lowest ever PGA commencing round of a nine-under par 63 on the opening day of the Memorial.

McIlroy was five under par through 10 holes and then holed 15-foot eagle putt on the par five, 11th to move to seven-under par. 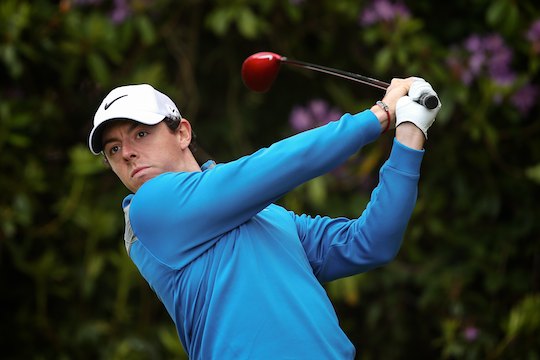 The Irishman, fresh from his victory in last week’s BMW PGA Championship, birdied the 13th to move to eight under before the only hiccup in his round when McIlroy doubled the par four 14th before a second eagle in holing a 15-footer at the 15th hole.

McIlroy then went to nine under par when he birdied the 16th ahead ending with back-to-back pars.

It is McIlroy’s lowest starting round on the PGA Tour since opening rounds of 64 in the 2010 Deutsche Bank Championship and a similiar 64 on day one of the 2012 BMW Championship.

It is easily his best first round in the Jack Nicklaus hosted Memorial in five appearance in Dublin, Ohio with his prior lowest first round being a 66 in the 2011 event.

As well, McIlroy’s 63 matched the same score he shot earlier this year on day one of the Honda Classic where he eventually lost out in a play-off.

And today’s 63 along with the 63 in Honda Classic is McIlroy’s equal lowest score in 33 rounds on this year’s wraparound 2013/24 schedule.

However there was some concern for McIlroy when he seemed to suffer a left knee injury and was observed sitting down after hitting one drive to stretch his left leg.

However any discomfort the 25-year old was suffering was compensated by a brilliant nine under par 63 in front of the 18-time Major winning tournament host that lifted McIlroy three shots clear of England’s and reigning Irish Open champion, Paul Casey along with double Augusta winning Bubba Watson.

“Honestly, I don’t know how I hurt my knee,” said McIlroy.

“I felt it in taking my second shot on the 7th and my foot may have got stuck in the ground a little bit and forced my knee. So I am going to get some treatment on it now and have a physio look at it but it was painful right after I hit shots but then I sort of walked it off before hitting my next shot and then it became painful again.

“A little of ice and some treatment and hopefully it will be alright for tomorrow.”

In speaking of the injury McIlroy also revealed he is carrying a lower back complaint he sustained on day two of last week’s BMW PGA Championship.

“The knee is a new injury and I haven’t felt this before and I have never struggled with my knees before and it’s always been my back, and I tweaked my back last Friday at Wentworth so I am still struggling with that a little bit.

“But as for the knee, I don’t know where it’s come from but I will see the physio and let them work on it.”

McIlroy had just 22 putts in his round on the Muirfield course and despite a 14th hole double bogey was pleased with his efforts.

“I put the knee concern out of my mind and when I was over the golf shots I just pretended it wasn’t there and tried to play the best shots I could even if it was going to hurt after a drive or hitting an iron shot into a par five.

“But I sort of just walked it off.

“I played really well from tee-to-green and holed a lot of putts, as well. I had two really good ups-and-downs at the last two holes and it could have been even better apart from that double bogey on 14.

“So I am really happy and it’s a really good opening round.”