Rory McIlroy brilliantly emerged from a near three-hour fog delay to find his way into the clubhouse lead with an eight-under par 64 on day one of the Abu Dhabi HSBC Championship.

Once the fog lifted the current World No. 6 was at his perfect best in seizing eight birdies to produce his lowest Abu Dhabi score in 39 rounds at the National course in the UAE capital.

McIlroy headed to the clubhouse a shot clear of England’s Tyrrell Hatton who snatched two eagles in his round, at the par-5 10th and 18th holes, in a round a seven-under par 65.

Sporting a standout pink shirt, McIlroy produced a superb all-round display of superb driving, precise iron play and seeing the hole as though it was a bucket. 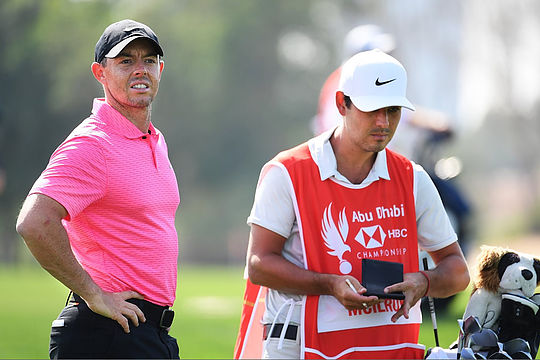 Rory McIlroy opened his 2021 season with an 8-under 64 (Credit: European Tour)

Though in saying that, his first drive since sharing fifth place in last November’s Masters was way right off the tee but McIlroy was soon back on the ‘short stuff’ to set-up a 15-footer for birdie at the par-5 10th hole in the UAE capital.

McIlroy, who was playing in the company of good friend and World No. 3 Justin Thomas, grabbed birdies also at the 12th, 15th and 18th holes to make the turn at four-under par.

McIlroy muscled his way into the lead at seven-under in holing a 15-footer from behind the flag at the par-4 sixth hole that he was playing as his 15th before moving to eight-under in holing a superb 20-footer at the eighth or his 17th hole ahead of a closing par.

“Yeah, it feels good. I actually thought that to myself after I turned 4-under. I knew 65 is the best I’ve shot here and I’ve shot it a few times, so I thought let’s try to go one better on the next nine and I was able to do that.”

“I felt like I drove the ball well for the most part, a couple of swirly ones in the middle of the round. Distance control was really good. I think I started off really well. Hit a lot of nice iron shots. But honestly it was probably the best I’ve putted these greens in Abu Dhabi in my whole career.”

McIlroy, as mentioned, had not played since last November’s rescheduled Masters and has purposely not teed-up until some nine weeks later to spend time with wife and newborn daughter, Polly.

And after an indifferent run of results since the June 11th lifting of the lockdown, he admitted he sensed a turnaround in his game at the BMW Championship last year.

“I sensed something starting at the end of the summer,” he said.

“One of the first breakthroughs I made was the second Playoff event, the BMW Championship at Olympia Fields. I played well there and felt like I sort of found something.”

“The next week, our daughter was born and I went to the Tour Championship and ended up playing pretty well. Played pretty well at the U.S. Open with a couple of not-so-great rounds, and then played okay at the Masters, just apart from a bad nine holes.”

“So it was getting better as the year went on, and honestly it was sort of disappointing that it finished when it did because I felt like I was getting right back into it. I didn’t really take much time off after Augusta. I sat at home for maybe three or four days and was like I just need to get out there and sort of keep this going.”

“I played quite a bit over the Christmas break and practiced quite a bit. Felt maybe as sharp as I’ve ever done coming into the start of the season. It’s paid off early.”

Interestingly, since 2005 McIlroy has finished second seven times and third place on three occasions in his first European Tour tournament of the season but has never won.

Lucas Herbert leads the Aussies in a share of 6th place and 4-under with Wade Ormsby and Jason Scrivener, who has yet to finish his round, another shot back in equal 10th.