(Dubai, UAE:) Rory McIlroy lived-up to a cheeky pre-event ‘I can play the course blindfolded’ threat to make his rivals seriously take notice in posting a sizzling 64 on the opening day of the season-ending DP World Tour Championship in Dubai.

Mike Lorenzo-Vera heads the elite field of 50 ending with four straight birdies in a score of a nine-under par 63 but already looming large in the Frenchman’s rear-view mirror is McIlroy.

McIlroy looked again in a class of his own and pulling-off what he described as his ‘shot of the year’ in sending a second shot 3-wood up the last to set-up an eagle ‘3’ finish on the Earth Course at the Jumeriah Estates.

The sight of his soaring ball with the word ‘RORS’ stamped on it brought all and sundry around the final green to their collective feet arriving from 291-yards around stop some six-feet from where McIlroy calmly rolled in the putt.

The effort was McIlroy’s lowest score on the Greg Norman designed lay-out and one shot less than a third round 65 to win the event for a second occasion in 2015. 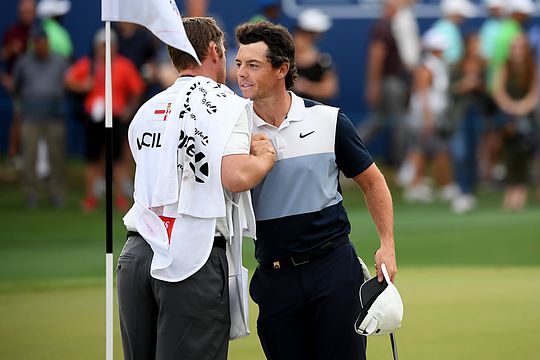 “I had 270 — equivalent 272-yards to the front, 291 to the pin, sort of back in off the left. Wind was off the left so it was a nice one for me to just aim straight at the pin and know if I hit my little draw it should hold but if it gets going on the wind, obviously the bunker on the right is better than the water on the left. I just flushed it.”

“When I was over it, it was sort of enough left and I sort of carried my 3-wood off the deck about 280, so it was right on the limit but as soon as I hit it, I knew it was perfect. It was right out of the middle.”

“It was great to finish like that, and yeah, it was a great round of golf.”

McIlroy cannot win the Race to Dubai but he’s projected to end the year second on the money-list as he targets a record-setting third DP World triumph and a career-equalling fifth victory in a season.

And he revealed an added inspiration to collect what also would be a 28th worldwide triumph.

“We just moved into our new house a couple of months ago but we still had not moved everything in, and the trophy cabinet had not been built,” he said.

“I got back from China, walked into our sort of game room and up on the wall were all the trophies and stuff. I was on a high from the win in China that was cool, but it’s a nice reminder sometimes.”

“I had not even all that stuff as it had been in storage for a year and a half, so it’s the first time I had seen the Claret Jug and U.S. Open trophy and all that sort of stuff.

“So, to have all my trophies is great and in a reflective moment, I can go and have a look at all I’ve achieved on the golf course the last few years but then it’s also a motivational moment that this is what I can do and I want more of it.”

And there was a thumbs-up for stand-in caddy, Niall O’Connor despite the former Ulster fly-half failing to fill-in an on-course ‘stats’ card as the European Tour get paid to do.

“Niall and I worked together well, he was brilliant,” said McIlroy.

“He was really, really good. First day down and no hiccups so far. Hopefully more of the same over the next few days.”

“The wind was really tricky today, so we were just trying to stay aware of that. It switched a little bit from north-west to more west the last few holes, and we were just being mindful of that because it can start to swirl out here. Hitting the ball well. Putting well. Everything is in good shape.”