Rory McIlroy has now paid a big price for an ‘excessive’ off-season training routine with an upper back injury forcing him out of this week’s Abu Dhabi HSBC Championship.

The World No. 2 underwent extensive clinical examinations, including an MRI, on Monday in Dubai after clearly struggling with injury on route to losing a play-off in last week’s BMW South African Open. 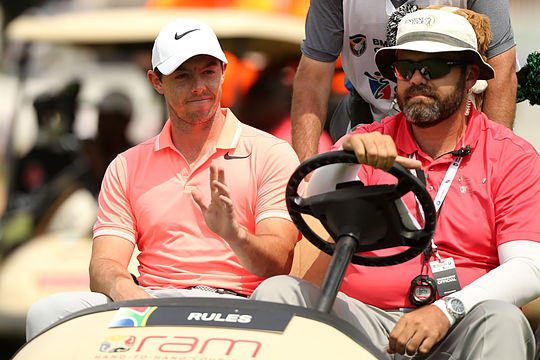 “It’s bitterly disappointing to have to withdraw from the Abu Dhabi HSBC Championship as everyone knows how much I love playing this tournament,” he said in a statement released by the European Tour.

“To be forced to miss this week through injury is really quite annoying to be perfectly honest, but I am sure the tournament will be a huge success and I hope everyone involved has a great week.

“In situations like this you simply have to listen to the experts and the team I have consulted have all advised me to rest until my rib has fully recovered.”

It’s the first serious injury worry in the career of the four-time Major Champion who is only aged 27.

McIlroy turned to using Callaway woods and irons, Titleist wedges and going back to a Titleist ball for the first time since turning pro in late 2007.

And now finding user-friendly clubs has come at a cost.

McIlroy was clearly in some pain throughout the South African Open with medical tape for support and relief clearly visible through McIlroy’s Nike shirts.

And on-course McIlroy was seen popping anti-inflammatory pills including right up until standing on the tee at third extra hole when his caddy handed him another pill.

McIlroy had spent the earlier part of this month at the Els Club in Dubai hitting countless number of golf balls and therein could lie the cause of his injury concern.

It led to a number of sleepless nights in South Africa and the clear discomfort he was in walking the Glendower course.

“I didn’t really get much sleep all week and just couldn’t get comfortable and I would wake up in the middle of the night to take a couple of painkillers,” he said following Sunday’s final round.

“But the physio guys did a good job on me in strapping me up pretty well, and then gave me the anti-inflammatories which helped.”

“If it’s a muscular thing then it’s just fatigue. I have hit a lot of golf balls over the last four or five weeks, testing equipment, so I think that’s probably just the thing. I have been hitting a lot of drivers, and you put a lot of force on your body when you do that.”

It is now unclear whether or not McIlroy will be fit in time for the February 2nd starting Dubai Desert Classic where Tiger Woods is set to compete.