McIlroy plays ‘fun’ Augusta round ahead of Bay Hill

World No. 1 Rory McIlroy has returned to competition for his first-ever appearance in the Arnold Palmer Invitational and his last event before next month’s Masters.

McIlroy has spent the past week away from competition after finishing T9th in the WGC – Cadillac Championship and in a week dominated by his throwing of a 3-iron into one of the many lakes on the Trump Doral course in suburban Miami. 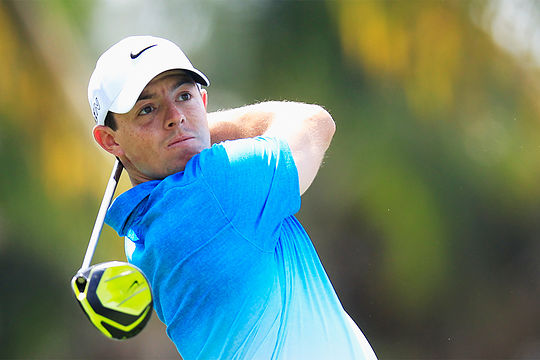 However two days after Doral McIlroy headed north to Augusta, Georgia when he and his father played the 2015 Masters venue in the company of four-time NFL Superbowl champion Tom Brady of the New England Patriots along with Denver Broncos quarterback legend Peyton Manning and Jimmy Dunne, CEO of the ultra-exclusive Semionole GC in Juno Beach, Florida.

“I didn’t hit any extra balls. I played one ball the whole time. I really wanted to go and enjoy it with my dad, that was what the whole thing was about. There were four father and sons and we had a great time.”

“I spent two days, one night and it was just about going and enjoying ourselves and that’s really what we did.”

“There was just the enjoyment of going and playing a golf course like that with my dad, being in good company with all the good people for a couple of days and drinking some good wine out of their wine cellar.”

“That’s really what it was. I had a really good time and it’s nice to feel relaxed in there for a change and not feel on edge the whole time.”

McIlroy joked that after finding himself in Augusta’s newly constructed gym alongside NFL legends Brady and Manning, he realised it was “time to leave”.

McIlroy is contesting the Arnold Palmer Invitational for a first time and also will dine out with the legendary seven-times winning Major champion.

Last weekend, McIlroy spoke with Jack Nicklaus about how to deal with heading to Augusta National next month and his goal of joining Nicklaus and four others as the only golfers to have won the coveted ‘Grand Slam’.

As well, McIlroy has continued to work closely with long-time coach, Michael Bannon.

“The last five days have been really good, working with Michael just one on one, no one else around,” the 25-year-old said. “I am feeling much better about my game now than I was walking off Doral, 10 days ago.”

Jordan Spieth’s play-off win at the Valspar Championship on Sunday intensified the notion that he and Patrick Reed have upstaged Rickie Fowler as American threats to McIlroy, at Augusta and beyond. It is a challenge the Northern Irishman seems to welcome rather than fear.

“It is great to see,” McIlroy said. “Patrick has already won this year, Jordan had a phenomenal time last year and has won again. It’s great. It’s a more youthful sport than it used to be. You see younger guys coming up and coming through. They went on Tour and become more confident and feel like they can do it each and every week, so that is great to see.”

And what of Woods? There remains a question mark over the 39-year-old’s Masters participation amid a break from competition, triggered by a loss of fitness and form. Should Woods return in Georgia, McIlroy claims it would be folly to write him off.

“He knows his way around Augusta,” said McIlroy. “If he feels ready to play and he does play, then he knows what to do when there. Someone that’s won the Masters four times? I think he’s pretty comfortable in that place.”

Meanwhile, Bubba Watson has withdrawn from the Bay Hill event because of the death of a childhood friend, it was revealed on Wednesday evening.

McIlroy, Rickie Fowler and Jason Day will feature in a star three-ball for the opening two rounds of the US$6.3 million event.

The group features three of the game’s top players in their 20s including McIlroy, who turns 26 in May alongside Day, who is 27, and is No. 5 in the world plus the 26-year-old Fowler, who clocks in at No. 11 on the World Rankings.

McIlroy captured his second Dubai Desert Classic title earlier this year while Day won the Farmers Insurance Open and Fowler’s best finish of 2015 is a tie for 12th in his last start at the World Golf Championships-Cadillac Championship.