McIlroy ready to win historic 148th Open for himself

Having walked down the 18th fairway at Royal Portrush late on Monday June 1st and stood in front of the largest Major Championship 18th hole grandstand, I thought to myself what the noise may be like if an Irish golfer were to win the 148th Open Championship.

Better still, how defeaning would it be like if that person was Rory McIlroy. 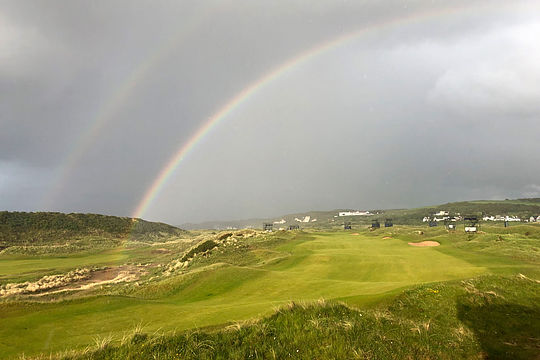 I had walked all 72 holes with McIlroy at the 2014 Open at Royal Liverpool and to see close-up what the atmosphere was like was something I will long remember.

McIlroy is heading to his 10th Open Championship since making his debut by winning the Low Amateur medal in 2007 at Carnoustie.

He will be looking more importantly at ending a four-year Majors drought since capturing the 2014 PGA Championship just three weeks after winning at Hoylake.

But while McIlroy’s biggest quest is to win his first Masters, how special would it be if the now 30-year old was to lift the Claret Jug in what will be the first occasion in 68-years that the game’s oldest major has been staged in Northern Ireland.

And while Irish residents have purchased some 70% of the tickets that went on sale, if McIlroy were to capture a second Open he’s insisted the victory will be all about himself.

“Golf is a selfish sport, and you want to win for yourself,” said McIlroy.

“At this point in my career, I want to win for me. It’s not about trying to do something in front of friends and family. So, 100 percent the win is all about me.”

“I didn’t know if I’d ever have an opportunity to play in a major championship at home. It has been a tournament that I’ve earmarked for a while. I’m looking forward to it. I’m excited about it. I’m not going to hide that fact.”

“It’s going to be a massive week for golf, for the country, and for me personally. It’s just about harnessing that support and harnessing that environment the right way and trying to use it to your advantage.”

“I have to go out there with a good mindset and obviously not let the occasion get the better of me and hopefully produce some good golf and give myself a chance.”

A big plus in McIlroy’s 2019 Open Championship arsenal is that he knows Royal Portrush as well as he knows his beloved Holywood course in suburban Belfast.

In fact, McIlroy holds the Royal Portrush course record of a 61 however with a new 7th and 8th hole a newer record has yet to be set in formal competition.

And while we wait for McIlroy to hopefully capture that illusive first Augusta National green jacket nothing will be as important to him in what is left of 2019 than to win The Open at Royal Portrush.

“My record in the Open Championship the last few years has been good,” he said.

“I’m going to a golf course that I played well on before and I know better than most of the guys that are playing that week.”

“But just because where it is, there’s no reason why I can’t go into it and treat it like any other Open Championship.”

“I’ll go through the same preparation, I’ll play practice rounds. It’s the same stuff. I’ve done it hundreds of times before. I’ve played a lot in them. I’ve done well in a lot of them.”