McIlroy closed with a final round 69 for a 22-under par tally. 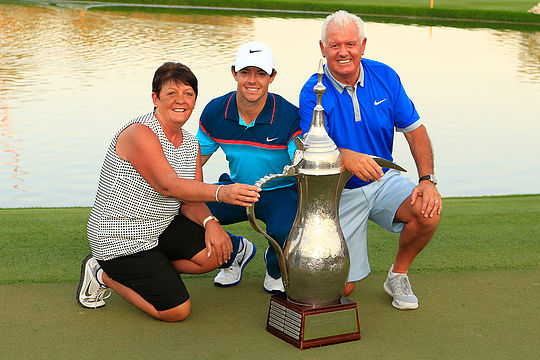 Sweden’s Alex Noren shot a round 65 to finish second on 19-under par and three clear of double defending champion Stephen Gallacher of Scotland who posted a 69 for a 16-under par total.

“It’s been a fantastic week for everyone who played here this week and it’s just nice to get my name on that trophy again,” said McIlroy.

“So I am very delighted because I was feeling like I was playing for second every time I was teeing it up, so it was time for a change and the only way I wanted to go was one better and thankfully I was able to do that today.

McIlroy went into the last round of his second event this year leading by four shots at 20-under par but it was a slow start for the 25-year old to be level par after nine holes with a third hole birdie and a bogey at seven.

However McIlroy went five clear of his rivals with a birdie at 10 before a birdie on 13.

He then ended with five straight pars including missing a 20-foot birdie putt for an eventual par at the last that would have given McIlroy the new record of 23-under par.

Victory earned McIlroy a prize cheque of €378,778 that has taken his European Tour career earnings to just over €24 million while victory also extends his lead in the World Rankings.

And despite the apparent ease of his victory, McIlroy admitted afterwards he still gets nervous, and was also conscious of recent European Tour collapses from South African Charl Schwartzel, who let slip a five shot leading cushion to lose the South African Open while last fortnight reigning US Open winner Martin Kaymer blew a 10-shot lead to let slip victory in Abu Dhabi.

“I do still get nervous and felt I was a little tentative the first few holes out there because I guess we have seen what can happen to big leads over the past few weeks with Martin and Charl, so I was conscious of that,” he said.

“So I was trying hard not to make any mistakes and happy I was able to play a solid round.”

“I set myself a target that tries to take everyone else out of it, so I try to get to that number and I know if I get to that, and especially with a big lead, it is very unlikely that anyone else will reach whatever number I set myself.”

“So that’s the way I approached it today and while I didn’t quite get to the number I set myself I was still able to do enough.”

Richard Green finished the best of the small Aussie field at T25 with Wade Ormsby the only other Australian to make the cut at T67.