Rory McIlroy backed up his opening round 66 at The Open Championship with another one on Friday for a four stroke lead over American Dustin Johnson at Royal Liverpool.

McIlroy did it with seven birdies and a bogey which gives him 13 birdies and one bogey for the tournament to be 12-under-par. 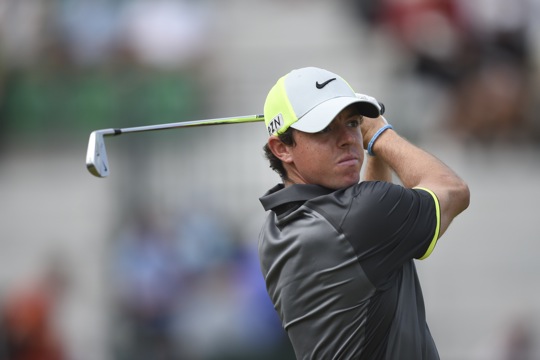 Rory McIlroy fired back to back rounds of 66 to lead the 2014 Open Championship (Credit: Getty Images)

“I just wanted to play another solid round of golf and stick to my game plan,” said McIlroy.

“I went out there and executed the game plan the way I wanted to and I’ll need another two of them. I’m very comfortable in this position. I wished I could get into it more often but I feel great out there and confident with my game.”

Woods followed his first-day 69 with a 77, and needed a desperate eight-foot birdie to assure himself a spot on the weekend albeit 14 strokes behind McIlroy.

World number one Adam Scott also had his share of troubles carding a 73 after opening with a 68 to be in a share of 15th position alongside fellow Aussie, Marc Leishman, nine stroke behind McIlroy.

“It was really, really important to finish with a couple of birdies and put me in good shape for the weekend,” said Scott. “Lunch will taste a lot better. If the wind stays up this afternoon, I shouldn’t be too far back.”

Royal Liverpool certainly brought on the challenge for the second round as the wind returned showing this classic links layout does bear some teeth.

“It’s good to get some links golf again,” said Leishman. “It’s like night and day to what we play in America. It’s a heavier wind. The ball can run out 50, 60, 70 metres. It’s nice to finally come to grips with it and handle it a little bit better.”