World No. 1 Rory McIlroy will not add to his end-of-season playing schedule despite sitting out nearly six weeks due to an ankle injury.

McIlroy is returning to competition at this week’s PGA Championship and his first event since sharing ninth place in June’s U.S. Open.

Before teeing off in on day one at Whistling Straits McIlroy spoke of his playing schedule post the FedEx Cup Play-Off Series including abiding by a PGA Tour request three years ago to contest for a first time the October 14th commencing Frys.com Open in California’s Napa Valley. 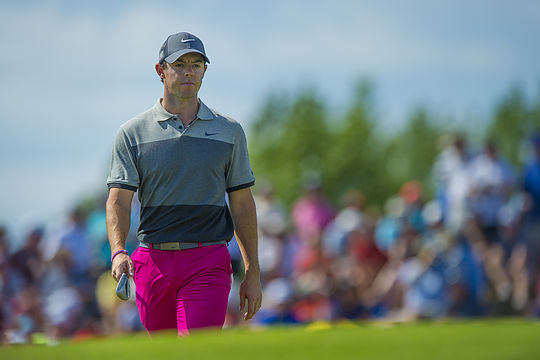 Contrary to most reports McIlroy is not competing in Napa out of personal desire but with the PGA Tour having insisted he compete in the $6m event, and the first tournament of the 2015/16 wraparound schedule, after having been afforded a ‘release’ from the Tour to compete in the 2012 Turkish Airlines World Golf Final in Belek.

The Turkish event featured eight of the game’s best players, including McIlroy and Tiger Woods then ranked a respective One and Two, playing for a prize purse of $US 5m and with Justin Rose sporting shorts like most in the field, capturing the $1.5m first prize purse.

“Following the FedEx Cup I am playing the Frys.com Open as that was the deal with the Tour when we competed out in Turkey a few years back”, McIlroy said.

“So when I played Turkey a few years ago it was the deal we did with the Tour but then I am looking forward to the Fry’s as I’ve never been to that part of California before.

“Also I know I will have a strong fan base out there given the support I received in San Francisco earlier this year in the winning the WGC – Cadillac Match-Play.

“I am then heading back to play a few events on the European Tour including the WGC – HSBC Champions event in Shanghai and the last event of the season, the DP World Tour Championship.”

But then McIlroy has ruled out competing in a third straight Australian Open where victory in December 2013 kick-started his double Major winning 2014 season.

“I was only contracted to play the one Australian Open but then after winning in 2013 I wanted to show respect to the tournament by defending my title,” he said.

“But it’s not on my schedule this year so there will be no Australian Open this year.”

And given his time away from the game, that included missing the defence of his Open Championship and last week’s WGC – Bridgestone Invitational titles, the 26-year old will not seek to add further events to his schedule.

“No, despite my time away with injury I don’t intend to start adding tournaments here and there because after this week here at Whistling I do intend to take it easy,” he also said to Reuters.

“This is my first week back after the injury so I want to see how my leg stands up to this week and then we will reassess matters.

“Of course, we are not expecting any problems but then given the seriousness of my injury I will still have to cross evert T and dot every i.”