McIlroy rises to the top in Dubai

Rory McIlroy sank a short birdie putt on the 18th hole on Saturday to remain tied with Luke Donald as the world’s two top-ranked golfers pulled three shots clear of a star-studded field after the third round of the DP World Tour Championship.

McIlroy, who has already collected the European and PGA Tour money titles, struggled early when he bogeyed the first hole and missed several makable birdie putts. 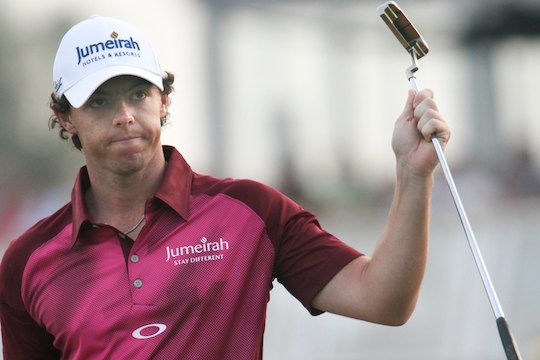 But he moved on the back nine, sinking a 30-foot eagle putt at the 14th to go with three birdies for a 6-under 66.

Donald also had a 66 to sit alongside McIlory at 17-under.

South Africans Louis Oosthuizen (68) and Charl Schwartzel (67) are three shots back, while Branden Grace and Joostis Luiten of France are a further two shots behind.

Donald and McIlroy both birdied the 18th to set up a season-ending duel between the world number one and two.

The pair have not played in a final round together since 2007 and that was when Donald was ranked 17th and McIlroy 233rd.

On Friday Sergio García equalled the course record of 64 with an extraordinary morning’s play.

This marks García’s first competitive outing since the Ryder Cup, playing with a new set of TaylorMade R-Bladez irons and his maiden appearance since he underwent laser eye treatment in Oviedo, Spain.

Though McIlroy has the world’s top ranking locked up, a victory on Sunday would affirm his claim as the world’s best golfer heading into 2013.

“I guess I’m number one going into next year. But it will be nice to put an exclamation mark on, if you want.”

Marcus Fraser is the only Aussie competing in the season-ender and is at 5-under after rounds of 69-67-75.