McIlroy says he has learnt from Portrush OB

We all remember the shot and Rory McIlroy has vowed to not again suffer Open Championship stage fright two years on from driving out of bounds off the first tee and smashing a woman’s mobile phone at Royal Portrush.

McIlroy’s errant shot way left off the opening tee in 2019, and in front of so many expectant Irish supporters and sadly laid the foundation for a horror round of 79 that virtually ruled him out of golf’s oldest major. 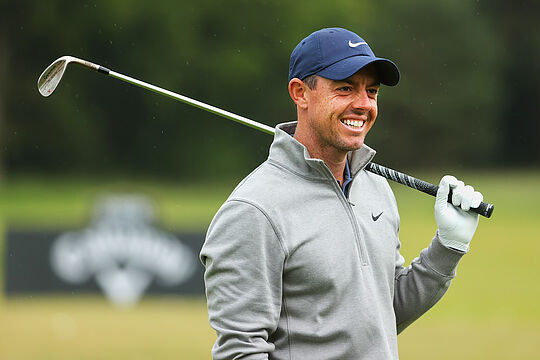 McIlroy admits he was simply overcome by the enormity of the moment and despite a day two 65, it was not good enough to play all four rounds on a golf course where, as a 16-year-old, he had shot a 61.

Now after weekend practice rounds at Royal St. George’s and three days out from the largest spectator attendance at a Europe golf event since that July two years ago, McIlroy reckons he’s got it sorted.

“I learned a lot of lessons from the last Open as I didn’t approach Royal Portrush in the right way in terms of preparing myself to play in that atmosphere, and in front of those people,” he said.

“It was almost as if once that first round was out of the way I was unburdened because I was like ‘I can’t win from here’ and then I went out and shot 65 on the second day.”

“It’s trying to feel on the first day how I felt on the second day, I think that’s the key. That’s just unburdening yourself. There are certain things you can do, mental exercises, to get into that frame of mind but in Portrush that week I certainly didn’t do a good enough job and I learned from that and it is something I’ve obviously tried to improve on since.”

Prior to being introduced on the opening tee two years ago, McIlroy had produced a win and three other top-fives in his four prior Open Championships.

Though now in teeing-up in what is a 12th career Open, McIlroy’s had a best of a T5 in his last six majors since the 2019 Open and that was in the 2020 Masters.

McIlroy also enjoys past Royal St. George’s experience having contested the 2011 Open Championship and also the five years earlier in contesting the 2006 British Amateur on the Sandwich lay-out.

And in fairness to McIlroy, links golf has long been in his DNA.

“Royal Portrush wasn’t what I wanted but I’ve had a win, a second and two other top-5s.”

“I feel comfortable in that environment, it’s been nice to get back to links golf last week in Scotland as I’ve not played links golf for two years so to familiarise myself with it has been nice.”

“I’d have previously said in my career the Open was not the major which suited me the most but results would say otherwise”.