All week Rory McIlroy had talked about his determination to finish the season in grand style, but surely even he didn’t dream of winning the DP World Tour Championship in Dubai in such breathtaking fashion from Justin Rose.

Tied with Rose standing on the 17th tee, McIlroy produced a bullet of an iron shot that finished six feet short of the flag and the world number one nailed the birdie putt. 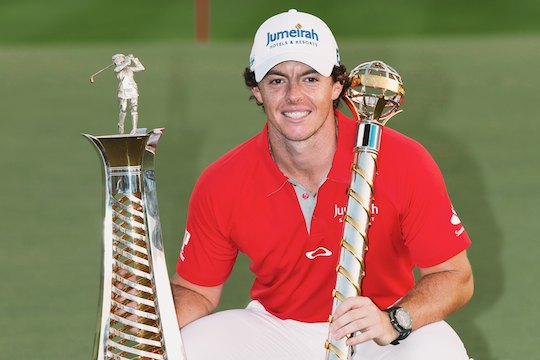 Then, at the par five 18th, and with the green clearly reachable in two, the 23-year-old emphasised his growing maturity by resisting the temptation to reach the green in two and therefore taking out the dangers lurking left of the flag.

As it turned out, he pitched from 85 yards to 12ft and holed the birdie putt to make it a two-stroke triumph, finishing at 23-under-par.

“It is a great way to end a great year,” said McIlroy.

“I came here with that intention and to pull it off feels tremendous. It was a dream finish, managing all those birdies and a wonderful way to go into my break. Now I can really enjoy it.”

Rose had earlier fired a peerless 62 that not only lowered the course record by two shots, but it was two better than any round he had previously played in his career.

When he signed off after one of the putts of the season on the 18th, he was two clear of McIlroy, who had just birdied the 14th.

It was billed as the battle between the world numbers one and two, but as Donald faded, plagued once again by a sinus problem, Justin Rose emerged as McIlroy’s rival.

Donald also had nothing but praise for the way McIlroy closed out the season ender.

“That was like Tiger Woods in his prime,” said Donald, forced to share third with Charl Schwartzel.

“To able to do that when he needed – that is the sign of a great. It was extremely impressive and it shows us all how hard we will have to work to stay up with him.”

This was McIlroy’s fifth title of a season in which he won his second major and secured both the US and European money lists in a year of domination for the world number one on both sides of the Atlantic.

“I wanted to finish this season the way I believed it deserved to be finished,” said McIlroy.

“I didn’t want it to tail off timidly. It means a lot for me to finish in this fashion. Justin gave me the opportunity to do what I did.”

McIlroy will take a seven-week break during which he will get familiar with his new Nike clubs. He will then be taking on Tiger Woods at Abu Dhabi for his season opener in what McIlroy has described as a modified 2013 season in which he plans to play fewer events, yet still maintaining the same goals.