On the eve of the CJ Cup, a swaggering Rory McIlroy proclaimed that when he was on his game, he was the best player in the world.

Four days later he lived up to that statement in capturing a 20th PGA Tour title with a stunning one-shot success thanks to a closing 66 for a record-setting 25-under par on the host Summit course in Las Vegas. 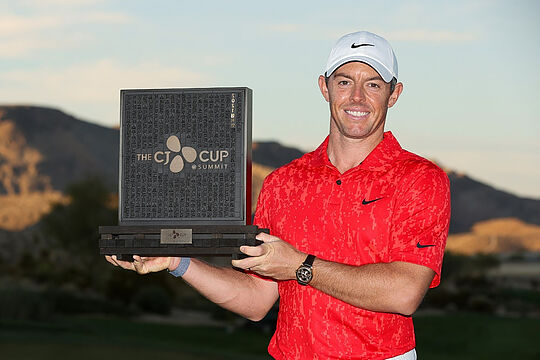 McIlroy brushed aside third round leader Rickie Fowler and kept Open Champion Collin Morikawa at bay to earn PGA Tour ‘Lifetime’ membership at the start of his 15th season on golf’s biggest stage. McIlroy’s exemption becomes official at the start of the 2023-24 season.

The Irishman set-up a 29th pro career win thanks to a third round 62, and his lowest score in two years, and then a closing round capped by a 14th hole eagle and five birdies.

It is McIlroy’s second success in 2021 proper after capturing the Wells Fargo Championship in May but his first of the new 2021/22 PGA Tour season. It was also McIlroy’s first event since the bitter disappointment of losing the Ryder Cup.

“It’s a big carrot and to get to 20 wins here is a big achievement,” said McIlroy, the 39th player to achieve the feat on the PGA Tour.

“I didn’t know if it was going to be this week, but I knew if I just kept my head down and kept playing well and kept doing the right things that eventually I’d get there.”

Fowler, who began the final round with a two-shot lead as he tried to end nearly three years without a victory, saw his quest for success end in taking a sixth hole double-bogey and then fade further with a level par closing nine of 71 to tie for third at 22-under par.

The threat eventually came from Morikawa, a member at The Summit Club, who shot 29 on the front to get in the mix and closed in holing a six-footer for an eagle ’3′ at the 72nd hole for a 62. It was also the reigning Open champion’s first event since the Ryder Cup.

And sitting just one spot back on the all-time money list is Adam Scott, who very nearly pulled off his first win since the Genesis Invitational in February last year.

The Queenslander was sitting in a share of third place heading into the final round and just three shots behind then-leader Rickie Fowler. However, a round of 69 on Sunday saw him fall into 5th place at 21-under.

Cameron Smith was another stroke back in 9th place in his first tournament of the new season.

The Tour now heads to Japan for the ZOZO Championship for the first time since the pandemic. The tournament was forced stateside last season where Patrick Cantlay claimed the first of four titles of the 2020/21 season.