Despite suffering a little jet lag world number one Rory McIlroy has posted a two-under par 69 on day one in the defence of his Emirates Australian Open title.

McIlroy was out early in breezy conditions to eventually post four birdies, including a near tap-in at his last hole, to be trailing the lead by just two shots at The Australian Club course. 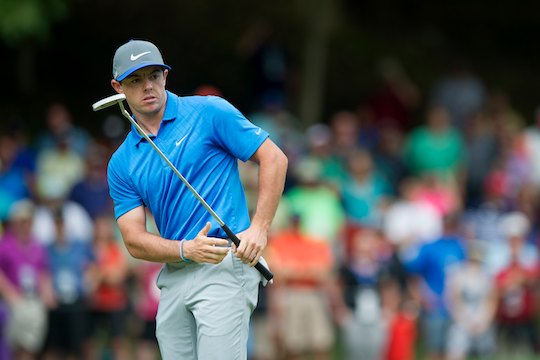 “I just a little lethargic out there this morning and it felt like the travels caught up with me a little bit as it is a long trip down here,” he said.

“There shouldn’t be because I didn’t really play competitive golf for six weeks before Dubai last week. I mean, it has been a long season, there’s a lot of travel involved so I guess a little bit of jet lag and just try and get over it as best I can.”

“I had a 4.30am wake-up call this morning, so try and get as much rest as I can between now and starting off again tomorrow.”

“But then I’m okay and it’s just that it took me a while to get going out there this morning.”

“I did hit some better shots coming in and anything under 70 today in the conditions is a decent score.”

After some heatwave conditions in Sydney in recent days, the first round of Australia’s premier golf tournament dawned cool and breezy and with players wrapped up under pullovers.

But as the day progressed the wind subsided around the middle of McIlroy’s round but then picked up as he headed to the scorer’s hut.

“It was very tricky for us this morning and it felt like it was blowing pretty strongly when we teed off but around the middle of the round it eased off it’s picked up again,” he said.

“However my ball striking wasn’t really there. Again, I played okay, I gave myself plenty of chances early on but I just know I can play better, so I feel if I’m on my game, I can get it going and shoot something in the low to mid 60s.”

And moments after McIlroy had signed his score of 69, Australia’s Adam Scott was heading to the second tee having taken a double at the first after finding trees with his opening tee shot.

There was the prize of a brand new Lexus NX sedan for US-based Aussie Scott Gardiner who aced the par three 11th hole he was playing as his second.

In fact, Gardiner commenced his round double-bogey, ace and then a birdie.