Rory McIlroy heads to this week’s US Open in the best form possible after storming his way to a sensational round of 61 for a seven-shot victory at the RBC Canadian Open.

McIlroy, despite a final hole bogey, destroyed the field winning with a 22-under par victory tally to smash the tournament record by five shots on the Hamilton course.

Fellow Irishman Shane Lowry wrapped-up his PGA Tour card for next year shooting a closing 67 and was joined in second place on a distant 15-under par when Webb Simpson birdied his closing two holes in a score of 68.

The recently-turned 30-year-old McIlroy captured a second Tour title this year despite some late round nerves, which saw him go bogey, eagle, bogey across his final three holes.

However it was the previous 15 holes where the 4-time major winner really set the course alight. McIlroy carved out five birdies in his first 7 holes before following that up with another four in a row from the 11th hole. 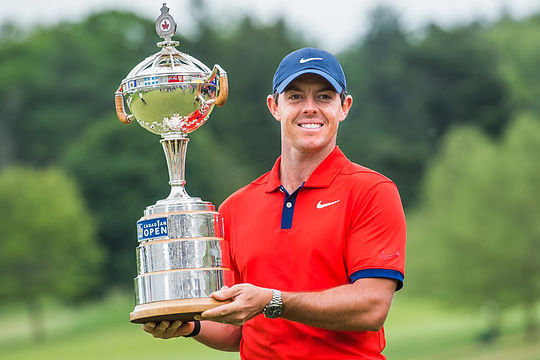 Despite letting slip a score of 59, McIlroy now heads to Pebble Beach looking to become the first player in PGA Tour history to win both the week before and the US Open.

McIlroy has previously achieved a similar feat in 2014 clinching the Bridgestone Invitational before lifting the Rodman Wanamaker Trophy a week later.

In fact, his 2014 PGA Championship triumph at Valhalla was McIlroy’s last Major but now after his Canadian Open win, McIlroy could be lifting a second U.S. Open trophy next Sunday on Father’s Day in what would be a long overdue fifth Major.

“I said at the start of the day I was going to go out aggressive and after nearly making eagle at the first that set the tone for the day,” he said.

“I just played with so much freedom over the weekend and more freedom than I’ve had for a while which is exciting as I have been able to win this tournament but exciting also for what’s coming-up ahead.”

“Shooting a 59 was definitely in my sights and while those two bogeys over the last three holes were unfortunate, at least I gave myself a chance at it.”

“I felt comfortable on this golf course all week even though I had not seen the back-nine before teeing-up in the tournament. I feel good now about my game going to Pebble Beach.”

“So, I feel that this week was great preparation coming here to Canada for the first time and going into next week.”

McIlroy emerged from last week’s Memorial horror show, where he missed his first cut of the year, crossing into Canada to dominate in all facets of the ancient game.

He’s already No. 1 in driving on this year’s PGA Tour and No. 1 in chipping and putting over the final day in suburban Hamilton.

The win is McIlroy’s second this season, his 16th on the PGA Tour and the 25th triumph in his pro career and the fourth by at least seven shots.

This victory, and in his first appearance in the Canadian Open, is also McIlroy’s sixth ‘National Open’ title adding to his US Open and Hong Kong Open success in 2011, his come-from-behind 2013 Australian win, 2014 Open Championship win and a victory on home soil at the 2016 Irish Open.

McIlroy’s win sees him not only heading to Pebble Beach as the new World No. 3 but now a very serious challenger to stop World No. 1 Brooks Koepka winning three US Open wins in succession.

In other good news for the Irish fans, Graeme McDowell sensationally booked himself a Royal Portrush tee-time at next month’s Open Championship after holing a remarkable 30-footer for a 72nd hole saving par.

McDowell now joins fellow Irish Padraig Harrington, Rory McIlroy, Darren Clarke and Shane Lowry on a Portrush course he knows like the back of his hand having been born and raised in the seaside town.

G Mac went into the final round needing to be inside the top-10 but also among the top-three not otherwise exempt into the 148th Open Championship.

Rod Pampling was the sole Australian to make the cut finishing in a tie for 35th following four rounds of 69.