Four-time Major winning Rory McIlroy admitted there was some good signs but also some loose shots in a round of 71 on day one of the 100th French Open.

McIlroy recorded three birdies and just as many bogeys in his round that also included finding the water twice in his round, at the 13th hole or the fourth of his round and then at the 18th or his ninth. 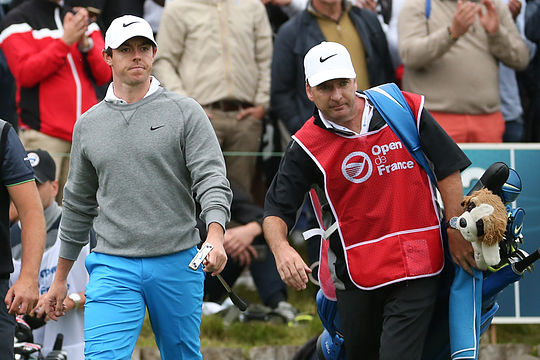 “It was a bit of an adventure out there as there was a few holes I got myself into a bit of bother,” he said.

“It’s a tough golf course when you start to go offline as it can really punish you and where I managed to make birdie.

“But then in looking at the leader board a 71 is not a bad foundation as it was tricky out there with the greens drying out a little bit from the wind, so conditions were not that easy out there.

“So anything in the 60s today is a good score.”

“I’ve been working on a few things and I have about four or five swing thoughts out there at the minute,” he said.

“When you consider how much I’m focusing on my golf swing and technique, I felt like I did okay today.”

“So I’m sort of half focusing on that and half focused on what I’m shooting out there, so it’s a work in progress, but I saw some good signs in there.”

“Hopefully, I’ve got another three completed rounds here and all of next week before a few days leading up to the Thursday at the Open, so hopefully by then it will all be bedded in.”

Lanky Dane Lucas Bjerregaard holds the outright lead with a five under par 66 and highlighted his round at the second hole with an ace.

However unlike the £140,000 BMW that was won last week by Scotland’s Richie Ramsay, Bjerregaard was presented with a magnum of champagne by French Open ambassador Jean Van de Velde.

Scott Hend and Jason Scrivener are the best of the Aussies in equal 62nd place at 2-over.