McIlroy sizzles at Honda Classic with 63

Double Major winning Rory McIlroy delivered his mum, Rosie an ideal birthday gift with a blistering nine under par 63 to snatch the clubhouse lead on the opening day of the Honda Classic.

McIlroy was wearing the orange colours of budget airline Easyjet but his display around the PGA National course was anything but budget with the 24-year old greatly impressing with a bogey-free seven under par score. 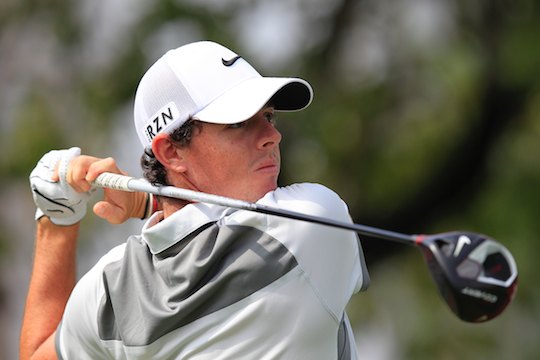 And watching the action close hand was McIlroy’s mum, along with father Gerry who could be very pleased considering a year earlier their son had embarrassingly walked off the Florida course after just 27 holes and later referring to the moment as the low point of his career.

However there could be nothing but praise on this occasion with McIlroy producing his lowest round of the year, and in front of one of the largest golf crowds of the season.

The current World No. 8 again upstaged reigning Masters champion Adam Scott who was three under par through 13 holes but then dropped shots at 14 and 15 before a good birdie on 18 for a score of a two under par 68.

Late last year McIlroy came from behind on the very last hole at Royal Sydney to snatch the Australian Open trophy right under the nose of the overwhelming home favourite.

One of the first comments from the US host TV following McIlroy’s round of 63 was: ”The kid is back!”.

But as his manager Sean O’Flaherty had remarked in Sydney following McIlroy’s success: ”Rory never’s been away”.

And McIlroy summed up his round in a very relaxed manner saying: ”I played really solid and the key around here this week, and it’s the same every time we play here, and that is hitting fairways and greens.

“It’s a good ball-striking golf course and if you can really keep your ball in play you can give yourself plenty of birdie chances, and that’s the name of the game here.

“I made a good par save on nine and that helped keep my bogey free round alive.”

And among those pleased with his birdie at 17 was his mum, Rosie who rose to her feet applauding her son.

“I saw that my mum was very happy with my birdie at 17 and then to finish with a birdie was very nice,” he said.

In contrast, 14-time Major winning Tiger Woods needed 30 putts as he struggled to a one over par 71.

“I hit it probably good enough to shoot at least three or four lower than I did,” said Woods.

“First four holes, I had good looks at birdie putts and didn’t make any of them. I hit it good starting out, scrappy in the middle and good at the end.”

Woods is contesting the Honda Classic for only the third time as a professional and indicated he misread several putts after being “fooled” by the speed and grain of the greens.