Rory McIlroy has pulled off an unlikely third FedExCup win following a final round six-shot rally over world No. 1 Scottie Scheffler this morning.

The 33-year-old fired 4-under 66 at the East Lake Golf Club in suburban Atlanta to erase Scheffler’s six-shot 54-hole buffer and take home the $18 million first prize along with the Tour Championship and FedExCup trophies.

While not a major victory, McIlroy’s win will go some way to making up for his heart-breaking loss to Cameron Smith at the Open Championship in July where, ironically, he was on the wrong end of a rampaging finish by the Australian.

“I’ve been knocking on the door so much this year. St Andrews was really hard for me…it was a tough one to get over. This softens the blow a little bit,” said McIlroy, who becomes the first player to win three FedExCup titles in its 16-year history.

“It doesn’t make it [Open Championship] that much easier to get over, but it’s great to end the season on a high note like this.”

Following weather interruptions during the delayed third round, it was Scheffler who came out swinging when play resumed early on day four. The World No.1 carded four birdies from the 13th hole on his way to establishing a seemingly unassailable six-shot lead.

However once the final round got underway, Scheffler’s lead quickly evaporated with three bogeys in his first six holes while McIlroy made up for an opening bogey with four unanswered birdies to flip the tournament on its head by the turn and with neither player making waves, it was McIlroy, who eventually sealed the deal by a single stroke on 21-under. 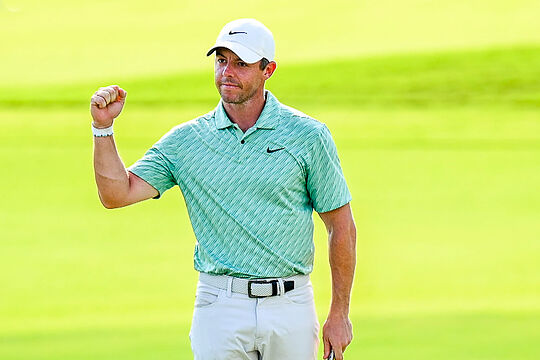 “Today the money definitely didn’t creep into my mind,” said Scheffler. “I wanted to win the season-long title. I’ve had a really great year and I wanted to finish it off with a win here, and unfortunately I wasn’t able to do that.”

The duo didn’t have the limelight all to themselves. South Korea’s Sungjae Im was well within the calculations until a costly double-bogey at the 14th hole saw him finish one shot behind McIlroy and in a share of second place alongside Scheffler on 20-under, each taking home US$5,750,000 in FedExCup bonuses.

Xander Schauffele, who had pushed Scheffler hard for most of the week, was outright 4th on 18-under. Max Homa and Justin Thomas rounded out the top-5 on 17-under.

Cameron Smith lead the way for the Australians in 20th place on 9-under while Adam Scott closed out his season in 25th. The pair walk away with US$640,000 and US$550,000 respectively.

The PGA Tour now takes a short break before resuming for the 2022/23 season in mid-September at the $7 million Fortinet Championship at the Silverado Resort and Spa North in Napa, CA where Max Homa will defend the title he won by a shot over Maverick McNealy.