Double Major winning Rory McIlroy burst back to form in style to grab a two shot lead on the opening day of the WGC – HSBC Champions at Sheshan, Shanghai.

McIlroy posted eight birdies and just one bogey in a seven under par 65 and just two shots from the course record. 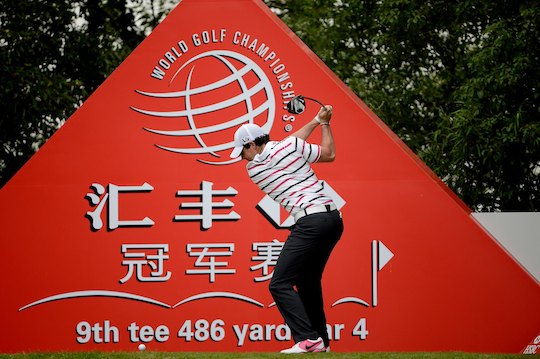 Rory McIlroy tees off during round one of the HSBC Champions (Credit: Asian Tour)

It is also the first occasion since the 2011 US Open at Congressional when McIlroy has actually led a tournament outright after an opening round.

Buoyed by his victory in Monday’s Match at Mission Hills over Tiger Woods, McIlroy was keen to put himself in position to win a regular Tour event in nearly 12 months.

Down from first place in the Official World Golf Ranking to sixth, McIlroy is 62nd on The Race to Dubai and needs to move into the top 60 this week to have a chance of qualifying for the DP World Tour Championship in November.

McIlroy is less than €4,000 behind Garth Mulroy in 60th place, but will need to win much more than that to feel safe.

However the first prize of €1,012,145 would send McIlroy safely to Dubai and the defence of his DP World Tour Championship.

“I came here yesterday and talked about how I like this golf course and how I felt like it set up well for me,” said McIlroy. “It felt good to be out there and be in control of my golf ball. I gave myself a lot of looks for birdies.”

“It’s a great start. It’s only one round of golf but it’s definitely the way I wanted and needed to start this week, keeping in mind that I obviously want to play myself into Dubai and try to pick up my first win of the season, as well.”

“It felt pretty good out there. I let a couple of putts get away from me, a couple of the downhill ones, but I was able to hole ones coming back, which was good.”

Starting from the tenth with a birdie, McIlroy gave the shot straight back at the next but also picked up shots at the 12th, 14th and 16th.

A long birdie putt was left inches short on the par three 17th but McIlroy made no such mistake from four feet on the par five 18th to reach the turn in 32, before another birdie on the first took the former World Number One into a share of the lead on five under.

McIlroy moved into the outright lead with a birdie on the par five second and although he missed from six feet to double his advantage on the third, he holed from similar distance on the next to avoid a three-putt bogey.

Open Champion Phil Mickelson emerged to join McIlroy at the top of the leaderboard with his sixth birdie of the day on the short par four seventh, the left-hander driving close to the green and producing a trademark pitch to three feet.

But in the group ahead, McIlroy holed from seven feet for a birdie on the par five eighth to regain top spot on seven under par, and Mickelson dropped four shots on the eighth moments later to undo much of his good work.

“It’s not even a hole. By that I mean if you look at your career being in the time you play a 18‑hole golf course, it’s really only half a hole that you’re struggling on.”

Mickelson after seeing his third shot come up short of the flag and roll down a bank into water guarding the green, Mickelson took a penalty drop and then spun his fifth shot from the drop zone back into the same hazard.

The left-hander finally found the putting surface with his seventh shot and two-putted, but compounded his misery by hitting his approach to the ninth into the water to the right of the green.

That led to a bogey five and meant Mickelson had to settle for an opening 71, one under par.