Memories of the late Arnold Palmer made it a sentimental journey for many of the world’s best players at last weekend’s annual Arnold Palmer Invitational in Orlando, Florida.

And former world No 1 Rory McIlroy and Ryder Cup star Rickie Fowler led the outpouring of emotion for the great man. 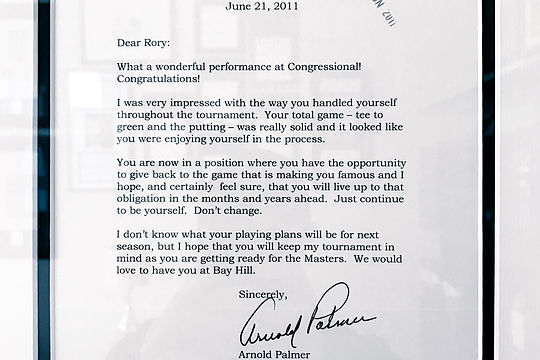 Fowler wore a pair of Arnold Palmer tribute shoes for the event with photos of him on the sides; they were later auctioned for charity.

McIlroy was content to share a framed letter he received from Arnold Palmer after his first major championship success, the 2011 US Open.

Posting the letter, which he now has framed, on Twitter it still holds pride of place in Rory’s heart – and his trophy room.

McIlroy said he remembered with fondness the dinner he shared with ‘Arnie’ after the first round of the 2015 tournament.

“I’ll remember it for the rest of my life,” said the popular Northern Irishman.

“So I’ll tell stories about that to my grandkids, hopefully, one day. He was a special man. Bay Hill’s a special place. It means a lot to us.”

No-one had more fans around the world.

Indeed Palmer’s letters to fans and players were so plentiful that he once estimated he spent tens of thousands of dollars annually on postage.

But his messages remain priceless to those who received them.

All the players missed his presence last weekend.

“When I walked onto the grounds this week, there was obviously a huge void,” said American Brandt Snedeker.

“When I’d first get to Bay Hill every year, I’d go to his office and see Arnold.

“It was always the highlight of my year, and that wasn’t here this year.”

While Palmer’s office has been left virtually untouched since he passed away in September last year, memorabilia still lined the shelves, and his leather chair sat behind his desk.

One by one, players visited Palmer’s office to sign memorabilia for the tournament that still bears his name.

They sat in the same chair where he signed an inestimable number of autographs . . . and silently thanked him for everything he’d done for professional golf.

He was, indeed, the King.