Quiet please! And with that warning from the Marshall, Rory’s girlfriend Caroline Wozniacki stopped her 11th tee conversation.

Yes, the Turkish Airlines World Golf Final is the sort of golf tournament where players bring partners and wear shorts. This tournament has a Coolum feel about it, relaxed yet with serious business to attend to and serious money up for grabs. 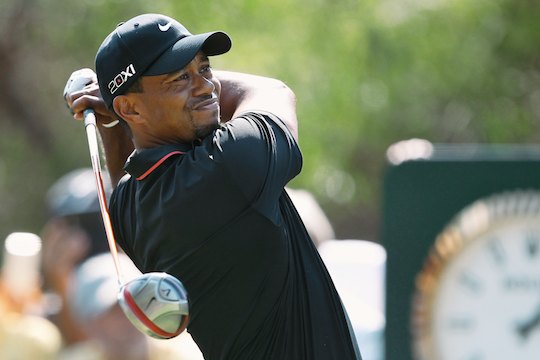 The area of Turkey is a golf holiday destination for thousands of Europeans. Many tourists took time out to check on the first day of the Turkish Airlines World Cup at the par 71 Antalya golf course.

The field of eight featured six Ryder Cup players. The many British tourists carrying Union Jacks were certainly looking for a UK win just to rub salt into the wounds of the US players following the European’s stunning comeback at Medinah a few weeks back in Chicago.

The first day kicked off with round robin matches. The top two players after three matches in each of the two groups will go through to the semis. The match format is stroke match play.

After opening round losses, both McIlroy and Woods face a must-win situation on Wednesday morning. If they fail to pick up points, their match during the afternoon would be rendered meaningless.

McIlroy went out with a one under 34 including an eagle at the 536m par 5, 7th with an accessible left pin but the back nine was a disaster. A triple at the 15th where he found trees off the tee, followed immediately by with two double bogeys.

At the 16th, a reachable par 5, he ran out of fairway left then found water out of the rough. Kuchar looked in control and having something of an increasing buffer in his match on the back nine as McIlroy slumped.

For Woods it was an uphill battle after a triple at the par 4, 9th, where he found water.

He then three putted. Two down at the turn, he managed to square the match after a birdie at the 17th. Both men 2 under hitting off the par 4 18th and finding the fairway.

Woods then hit his approach shot to the 18th way past the pin right pin and into a back bunker. He nearly found water getting out of the bunker. The resulting bogey basically lost Woods the match.

Mahan recorded four bogeys but alas not a birdie all day. An eagle for Rose on the par 5 16th was enough to take the day with and even par finish.

Simpson was leading Westwood by three shots at the turn with an even par 35. All square going down the 18th, but Simpson was unable to get up and down from a green side bunker to hand Westwood the match.

A busy day for the players tomorrow with two rounds of golf scheduled.

The playing order sees Westwood v Rose, Mahan v Simpson, McIlroy v Schwartzel and Woods v Kuchar and then the order will reverse, which will include the long awaited afternoon match between Woods and McIlroy.