That’s a guesstimate figure McIlroy would have earned in coming years as a Major Champion. 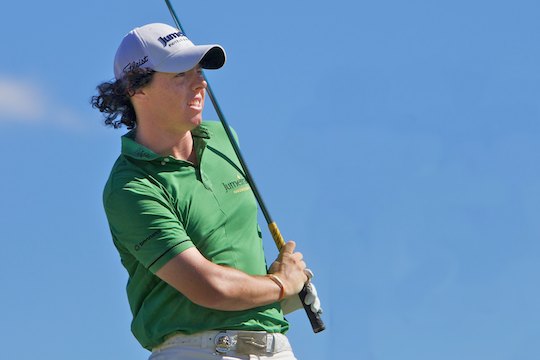 Rory McIlroy: Masters meltdown may have cost him a cool $10 million

For three days, the golf world marvelled that McIlroy was only 21. But then on Masters Sunday, we were cruelly reminded – he is still only 21.

But McIlroy’s collapse not only meant losing the US$1.44 million first prize cheque. It’s seen McIlroy blow a whole bank-load of bonuses in leading the third round by four but losing over the last day by nine.

Just as Louis Oosthuizen did last year in winning the British Open, so too is ISM going to benefit for this year’s Masters triumph.

The only problem is that the golfer Chandler expected to embrace at the back of the 18th at Augusta last month was not McIlroy, but Schwartzel.

Just as Oosthuizen is doing, Schwartzel will earn ISM enormous appearance fee payouts and other monetary niceties as the 2011 Augusta National champion.

McIlroy’s prize cheque of €89,928 saw him move to sixth in the Race to Dubai and that’s a €1 million difference between he and Schwartzel who now leads.

“The South Africans are pretty solid people, and don’t forget how many times Charl has won – nine times,” said Chandler when asked the difference between McIlroy and Schwartzel.

“Charl’s also been a pro nine years and that’s what he’s got over Rory. A bit more experience, a bit more winning experience.”

“Charl is different, and he’s a bit older, as well.”

Chandler’s long talked of the need to establish ‘life after Tiger’ in golf, and how good it would be if McIlroy were to win a Major.

But when asked about McIlroy completing the ‘Irish Grand Slam’ following his Augusta implosion, President of the Irish Golf Union, Eugene Fayne soberly remarked: “Let’s not be printing the T-shirts just yet.”