A visit to a recovering Tiger Woods’ residence has given Rory McIlroy a whole new perspective on winning more majors.

Not only was it McIlroy’s intent in visiting Woods to help keep his spirits high following February’s near fatal car accident but it was an inspection of Woods’ trophy cabinet that lifted McIlroy’s efforts to restart his own stalled career. 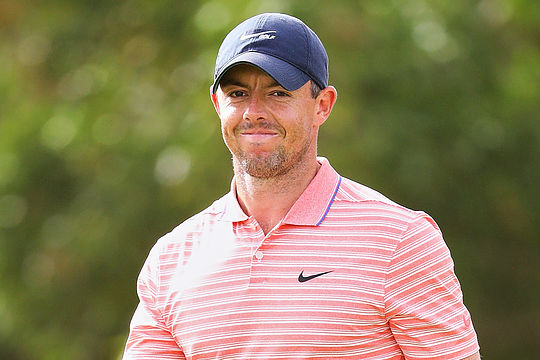 So much so, that all McIlroy could think about on the short drive back to his own Bear’s Club residence was why does Woods’ have just 15 trophies on display in his trophy cabinet.

Since turning professional in September 1996, Woods has won 137 times around the globe with 82 on the PGA Tour and 41 on the European Tour.

Ahead of McIlroy revealing he quizzed Woods where were all the other 142 trophies, McIlroy had spoken in the Masters media centre of the desire to peak for the four majors by either treating them like each other tournament week, or circling the four weeks on a calendar.

“Circling the four majors on the calendar is probably the best way to go,” he said.

“So, when I went over to Tiger’s house a few weeks ago to see him ahead of the Match-Play, and in his family room he’s got his trophy cabinet and it’s his 15 major trophies.”

“I said, “That’s really cool. Where are all the others?”

“I was driving home, and I was thinking…that’s all he cared about.”

“How easy must that have felt for him if all he cared about were four weeks a year. The other stuff must have been like practice. So that’s like a really — that’s a cool perspective to have, right.”

“Yeah, that’s all I could think about on the way home. And I was glad he was okay, too (laughter).”

In visiting Woods, McIlroy spoke of a pact, for want of a better word, between Woods’ friends who live close by and how they’re getting together to ensure Woods stays positive and in continuing good spirits despite the near tragedy on a LA highway.

“I spent a couple hours with him, which was nice”, said McIlroy.

“It was good to see him in decent spirits and actually not as, you know — like when you hear of these things and you look at the car and you see the crash, it’s like, you think he’s going to be in a hospital bed for six months. But he was actually doing better than that.”

“A few of us that live down in South Florida went to see him. I’m sure he appreciates that.”

“And, again, as I said, everyone would love to see him back out here again. I think myself, J.T., Rickie, DJ, Brooks, all those guys down there, we all have a responsibility to try to keep his spirits up and keep him going and try to get him back out here”,

You see, golf is more about just winning trophies.