World No. 1 Rory McIlroy bizarrely singled out hitting practice balls overnight in the basement of a rented Fort Worth home as a key to moving well into contention on day two of the Charles Schwab Challenge at Fort Worth, Texas.

McIlroy broke free after parring his closing nine holes in a day one 68 to cut a swath through the Lone Star State field with a rousing Colonial club second round 63 to move to 9-under par.

McIlroy headed off for a ‘grab-and-go’ lunch under the strict Coronavirus restrictions with his lowest PGA Tour score since a similar 63 on day three of last October’s ZOZO Championship in Japan.

He did need a birdie at the last to join seven others with a share of the course record of 61 but had to settle for a ‘good’ bogey, if there is such a thing as a good eight-foot bogey.

“It was really good and I felt like I built my score really well,” he said.

“I took advantage of some of the easier holes. I played conservatively on some of the tougher ones, especially three, four and five, the horrible horseshoe.”

“I made three of my pars there and moved on and then birdied the next two holes. Just smart, played to my strengths, put it in play and gave myself plenty of chances.”

“I felt pretty comfortable out there, and hopefully I can do the exact same thing over the next two days.” 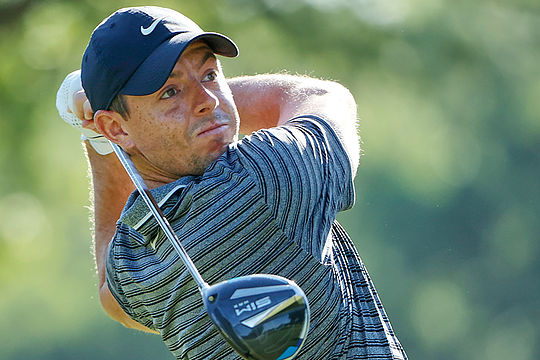 McIlroy and caddy, Harry Diamond are staying the week in a rented house rather than the confines of the strictly-controlled official hotels and it was working on a golf simulator that helped turn around his game.

“Actually, the rental home we’re staying in this week has a simulator in the basement, and I’ve actually hit a few balls in there last night, and that helped,” he said.

American Harold Varner III, who shared the overnight lead on 7-under, brilliantly bounced back from a shock first hole triple bogey 7 to birdie five of his closing six holes in a score of a four-under par 66 to head to the clubhouse on 11-under.

Nearby Dallas resident Jordan Spieth posted a second straight score of 65 as he looks to end a near three-year winless drought.

The Australians in the field didn’t fare quite as well with only Matt Jones making the weekend cut on 4-under par to take a share of 25th place.

John Senden, Cameron Davis, Marc Leishman, Cameron Smith and Jason Day all head home with work to do before heading to next week’s RBC Heritage.