Reigning Indonesian Open Champion Nick Cullen was looking for his third win at the Royal Pines layout though and after starting the day at 14 under par, was certainly the favourite with 18 holes to play. 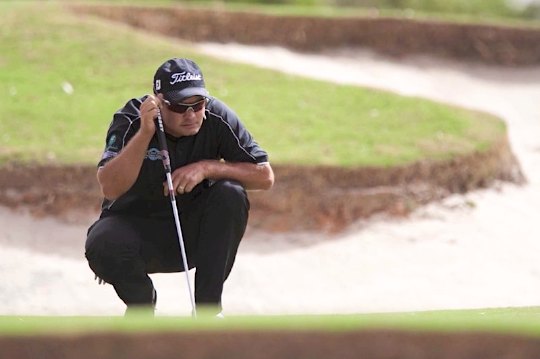 Shooting 65 yesterday though was Leigh McKechnie who took plenty of confidence into the final round and continued his good form with birdie on his first hole.

After paring his next 9 holes, the former NSW Open Champion holed his second shot on the 430m par four, ninth hole making eagle, and when Cullen bogied both the fourth and seventh holes, McKechnie had taken the outright lead.

Meanwhile, back in the pack was Adam Crawford and Matthew Griffin who recorded four round totals of 10 under par and setting a score for the leaders to beat.

Coming down the stretch, Cullen went chasing that illusive birdie though when he bogeyed the 13th hole, the title was handed to McKechnie’s despite a late bogey on the 14th.

For McKechnie the win not only sees the 38-year-old take home just under $18,000 in prizemoney, he also secures a start in the Jeep Tour Final to be staged from 29th November – 2nd December.

“This win means more than anyone would imagine. It has been a tough road this year and although I don’t feel like I have been playing badly, I just haven’t been able to put the runs on the board in the bigger events”.

“Not only will this now mean that it will take the pressure off for the remainder of the year, winning in front of such a strong field has proved to myself that I still have what to takes to mix it with Australasia’s best”.

The Jeep Pro Am Tour now heads to The Vines Resort in Western Australia where the professional will have one final chance to make it inside the top 60 on the Order of Merit and make it in to the Jeep Tour Final.