David McKenzie will be a hunted man when play kicks off this morning in the final round of the Mercedes-Benz Truck and Bus Victorian PGA Championship.

Heading into the final day at Huntingdale Golf Club, McKenzie has a four shot lead with a field of competitors hungry for a win trying to chase him down. 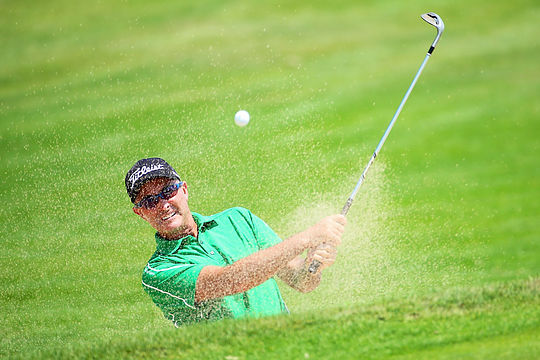 Overcoming a bogey on the 1st and holding on as the wind got up at the end of the day, McKenzie fired 3-under 69 to be 15-under the card after 54 holes.

A win would be a huge boost for the veteran Victorian who is aiming for a start in the European Tour co-sanctioned Perth International.

Sitting outright second and also overcoming a challenging start to his day is New Zealander Brad Shilton who ended the day with a 1-under 70.

A further shot back on 10-under the card is defending champion Aaron Townsend with a group of seven players, including James Nitties, Aron Pice and Matt Griffin rounding out the top-10 on 8-under the card.

In the Victorian PGA Amateur Challenge, Sam Newman wasn’t able to hold onto his overnight lead to win the event.

With a score of 31-under the card, Robert Wright and his Professional Daniel Fox claimed victory by six shots.