McKinney is coming off the back of his maiden win at the recent South Australian Amateur Classic at Royal Adelaide where he held off Jack Buchanan by nine shots but this time he had to work a lot harder for victory. 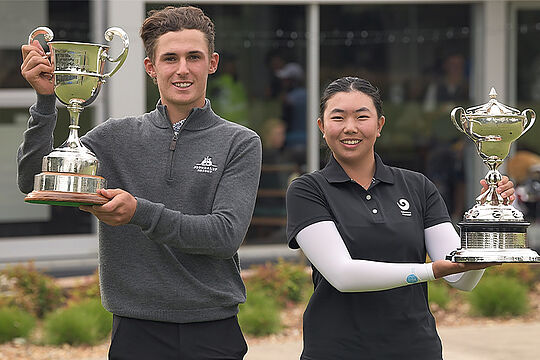 The Scottish-born McKinney was forced into a playoff after finishing regulation play on 10-under alongside Buchanan and New Zealand’s James Hydes.

The trio headed back up the 18th where McKinney was the only player to find the green in two and confidently put away his putt for a second trophy in two weeks.

“I had a shorter and similar putt in regulation which I missed but I knew the line the second time around even though I was a bit further. I was pretty confident with it and it dropped,” said McKinney.

In the women’s tournament New Zealand’s Fiona Xu, who finished runner-up in her last two events at the Rene Erichsen Salver in Adelaide and the Riversdale Cup, finished three shots clear of Queensland’s Justice Bosio on 11-under following rounds of 68, 65, 73 and 71 for a wire-to-wire victory.

For Bosio it was another heartbreaking near-miss with the second place result her seventh in the past eighteen months.

“It’s a huge honour to win this tournament like Lydia Ko did. I am very honoured,” said the 17-year-old Xu, who claimed the title exactly a decade after her idol and two-time LPGA major champion Ko.

“The conditions weren’t too bad on the first nine. I was able to get a few birdies but the second nine was a bit tough. The wind was very strong but I was able to stay calm.”

And for the first time ever, the Australian Amateur winners get to take home a cash prize following changes to amateur rules by the R&A, which came into effect on January 1st this year. Each winner is able to be awarded up to $1350 in prize money without effecting their amateur status.