The Melbourne Metropolitan Pennant Finals series will be contested this weekend across various venues with the Division 1 Men’s final seeing Yarra Yarra and 2009 winners Commonwealth going head to head for the prized top-order flag on the North Course at Peninsular Country Club. 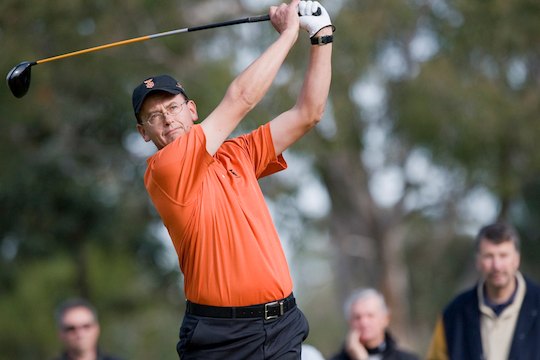 The club is seeking to win its 9th Division 1 flag, whilst Commonwealth is looking for its 12th.

Commonwealth will go into the final eager to reverse the outcome of the last meeting between the clubs, having been defeated four matches to three in their opening contest of the year.

Commonwealth is headed by State representative Geoff Drakeford and Matt Hinkley to spearhead their team to victory.

Both teams are battle hardened following an eight week season in arguably the strongest pennant series in the nation where forty-six clubs are separated into six divisions, the largest inter-club competition in Australia.

Commonwealth should not be underestimated are are arguably the more experienced of the two teams when you combine the seven man team.

Burges, Drakeford and Taylor have featured strongly this season with solid wins and have been supported well by Michael Burgess and Matt Hinkley.

Commonwealth’s three matches came from their number two, Matt Hinkley who accounted for Ben Campbell 3&3, and their number six and seven with Andrew Taylor winning on the 20th over David Shimmin and Michael Burgess securing an impressive 5&4 win over Peter Woodward.

In a stark turnaround Kingswood finished this year’s Division 1 series number seven and along with Kingston Heath have been relegated to Division 2 for the 2013 season.

Southern and Metropolitan have been promoted to Division 1 after finishing clear leaders in Division 2. They will contest the Division 2 final at Commonwealth Golf Club.

Division 3 has Cheltenham against Latrobe at Peninsula, with Rosanna and Peninsula fighting for the Division 4 flag at Amstel Golf Club.

Division 5 has Heidelberg against Goonawarra at Long Island with Riversdale and Patterson River doing contest in Division 6 at Amstel.