Adrian Meronk became the first Polish winner on the DP World Tour when he secured a three shot victory over New Zealand’s Ryan Fox at the Irish Open.

Meronk was one shot behind Fox with four holes remaining when he went birdie-birdie-eagle to nail his victory closing with an impressive 66 to finish at 20-under-par. He was the only player to finish the week with four rounds in the 60s.

“This is such a relief, to be honest,” said Meronk, who pockets the US$1 million winner’s prize and moves into the world’s top-100 for the first time at 64th.

“I’ve been coming close a couple of times this year, so to finally open the door is a dream come true. This is what I practice for every day. I’m super happy.”

Sunday’s victory also puts him inside the top-10 at 7th in the season-long Race to Dubai.

“I am so proud to also be the first golfer from my home country of Poland to win on the DP World Tour and plant our National Flag in the world of golf,” said Meronk.

“In hindsight it has perhaps been coming for a while, but there is nothing like getting that ‘W’ across the line. I have had six top-10 finishes this season before this week, including three in the month of May!” 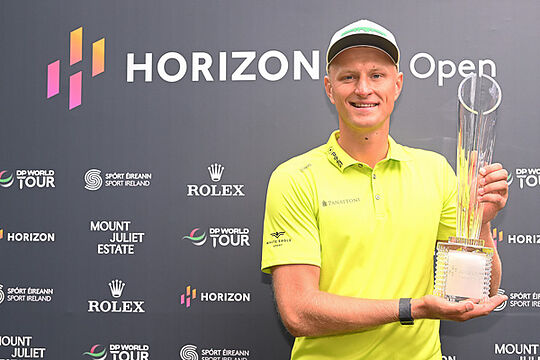 Lucas Herbert, who was defending his title at these championships, finished in a creditable 9th position to be the best of the Australians. Scott Hend and Min Woo Lee shared 58th position, with Maverick Antcliff in a share of 67th position.