Troy Merritt shot a 5-under 67 on Monday to win the rain-delayed Barbasol Championship at 23-under-par and collected his second career PGA Tour victory.

Heavy rain and thunderstorms forced the event into a Monday finish as co-leaders Hunter Mahan, Robert Streb, Tom Lovelady and Merritt battled it out. Merritt cruised through the final holes to add to his only previous Tour win at the 2015 Quicken Loans National.

The win was timely for Merritt who has struggled lately on tour with only one top-10 finish in both 2016 and 2017. The 32-year-old had to return to the Web.com Tour Finals last season to keep his card.

Merritt began the week ranked 131st in the FedEx points race with his 2019 PGA Tour status very much in jeopardy.

He had missed 37 cuts in 81 starts since his most recent win in August 2015 at the Quicken Loans National in Gainesville, yet following Monday’s victory he is now exempt through August 2020 and has earned spots into the PGA Championship as well as the 2019 Sentry Tournament of Champions and Players Championship. 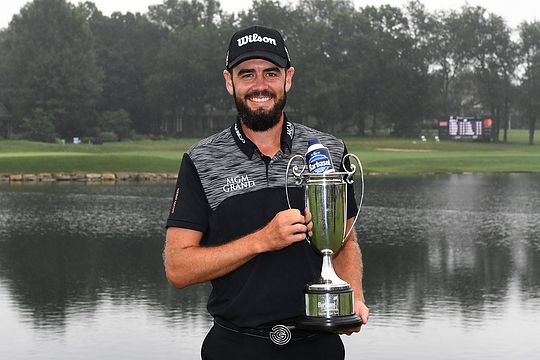 “It’s just so hard to win on the PGA Tour. You always ask yourself, ‘Is this the time to move on?”, said Merritt following his win.

“Just knowing that you’re going to have that security for two years, it’s awesome.”

The Monday finish was the PGA Tour’s second this season and the first since Jason Day won the Farmers Insurance Open in January on the sixth playoff hole.

Two-time LPGA major champion Brittany Lincicome, who was playing on a sponsor’s exemption, fell short in her attempt to become just the second woman to make the cut in a men’s event.

The 32-year-old finished at five-over to miss the weekend cut by nine shots.

“Just being inside the ropes with the guys, hitting on the range, on the putting green, it’s just a cool feeling,” she said.

“The guys just made me feel so comfortable. It was a great week. I enjoyed every minute of it.”

Cameron Percy finished the best of the Australians, earning his first top-10 this season with a tie for 7th position. It was Percy”s first top-10 since finishing in a tie for 10th at the 2017 AT&T Pebble Beach Pro-Am.

Percy was the only Aussie to make the weekend.

Robert Allenby, Stuart Appleby finished at even par to miss the cut, with Appleby missing his fifth cut in nine PGA Tour starts this season. Steve Bowditch fired 8-over and has yet to make a cut this season from his seven starts.

Bowditch has only made the cut twice now in 34 starts on the PGA Tour, the last occasion being at the CareerBuilder Challenge in January 2017 where he finished in a tie for 58th.

Peter Lonard, who made his first PGA Tour start this season and only his third since 2013 fired a 3-over-par.