Merritt wins, Tiger back in form at Quicken Loans

Troy Merritt won the Quicken Loans National on Sunday for his first PGA Tour title, closing with a four-under 67 for a three-stroke victory over the in-form Rickie Fowler.

The victory came a day after Merritt surged to the lead with a tournament-record 61 at Robert Trent Jones Golf Club. He won in his 96th career start on the tour, finishing at 18-under-par to deny Fowler another PGA Tour title.

The 29-year-old Merritt, ranked 180th in the world prior to this week, clinched victory with a bullet shot off the tee at the par-three 16th for a three-foot birdie, and then rolled in a 35-foot birdie putt at the last to secure his final round 67.

“So you have to go out and have a great game plan, pure it all week, make some putts, get some good breaks and luck and maybe have a guy or two stumble at the end.”

Fowler had started the final round a shot off the leader but was not able to capitalise with a number of missed par opportunities. David Lingmerth finished 3rd at 14-under. 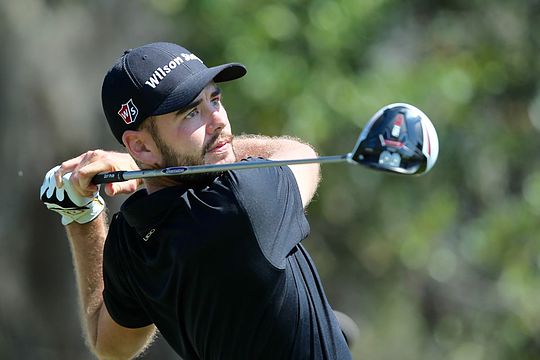 With teams for this year’s Presidents Cup becoming official in a few weeks, Fowler improved his chances of making the US squad after his runner-up finish on Sunday.

He moved from 11th to eighth in the US team standings, which are based on FedEx Cup points. The top-10 after the Deutsche Bank Championship, which ends 8 September will automatically qualify for the team.

Fowler, who won the Scottish Open three weeks ago, heads to the the WGC Championship this week in Akron before the PGA Championship the following week at Whistling Straits full of confidence to bag his first major title.

“I’ve been swinging really well as of late,” Fowler.

“Really feel good about my game. Butch and I have done some great work. Really looking forward to the rest of the summer. Akron is one of my favourite courses we play all year and the final Major. So, we’re off into The Playoffs. This is a good time to be playing well.”

Tiger Woods showed some of the best signs yet that his hard work over the past couple of seasons is starting to pay off. The former world number one fired rounds of 68-66-74-68 for an 8-under total of 276 and a share of 18th place.

New Zealand’s Danny Lee had another impressive finish at a PGA Tour event finishing at 12-under and in a tie 4th. This was the 25-year-old’s sixth top-10 finish in a year that includes his maiden victory last month at the Greenbrier Classic.

Robert Allenby missed another cut after rounds of 67-75 along with Cameron Percy and John Senden.