Metropolitan comes out on top at Melbourne Pennants

In a closely fought final, Metropolitan was able to win its first Division 1 Pennant flag since 1987 spearheaded by David Micheluzzi in the top-order position who accounted for Royal Melbourne’s Darcy Bremerton, 8&6, to get the first win on the board for his team. 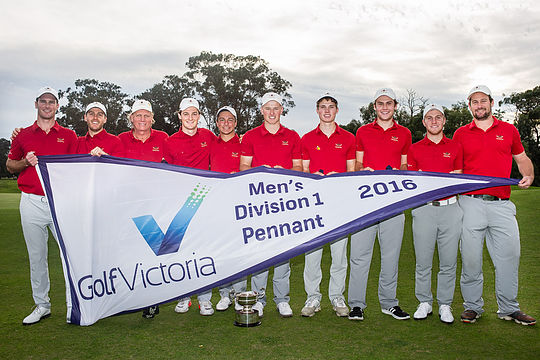 Nick Brown playing number 7 then maintained the momentum for Metropolitan with a 3&1 victory against Aaron Southern before Aiden Didone took Metropolitan within one match of the title with a 2&1 win over Royal Melbourne’s Paul Little.

Royal Melbourne fought back with victories to Matias Sanchez in the number 2 position over Metropolitan’s captain Matt Roberson and Will Heffernan against Metropolitan’s number 3, Lukas Michel, which had the final set at 3 matches to 2.

When Royal Melbourne’s No. 4, James McMillan, closed a three-hole deficit after 11 holes to win on the 18th to see the final balanced at three matches square, the attention moved to the number 5 match between Metropolitan’s Blake Collyer and Royal Melbourne’s Josh Hetherington which was set to be decided on the 18th.

The approach shots from both into the elevated 18th green at Spring Valley fell short of the target with Collyer finishing in the right green side trap and Hetherington missing the green, wide and left.

After Collyer hit a superb bunker shot to two metres of the flag the pressure was on Hetherington to play a delicate chip from a tight lie. Hetherington’s chip failed to make the green which saw the advantage swing to Collyer.

After Collyer rolled his putt to the edge of the hole Hetherington was not able to convert and the match was secured by Metropolitan on the last with a 1-up victory to Collyer.

This was a classic pennant final with two matches decided on the 18th in front of hundreds of supporters from both clubs. The tension so thick you could cut it.

Royal Melbourne had been the standout club all series and was looking for back-to-back victories after being promoted to the top-order division after winning the Division 2 final last year.

Having not won a Division 1 flag since 1931, the Royal Melbourne supporters were rightly emotional after the final, yet their team had performed gallantly and it was a fantastic effort in the first year back in Division 1 following a long period of absence.

Metropolitan had been close before, losing to Commonwealth in 2014 at Kingston Heath. This year the team went one better and the relief on the faces of Metropolitan’s supporters and players was obvious – the club had finally broken through and won the prized Division 1 flag.