She’s made close to $7 million on-course, and many times that figure off-course, in a career that began in earnest as an amateur at the tender age of 10 after qualifying for the US Women’s Amateur Public Links Championship.

Now at 32, and the mother of two-year-old Makenna, Michelle Wie West will call time on her full-time LPGA career following tomorrow’s US Women’s Open at Pine Needles. 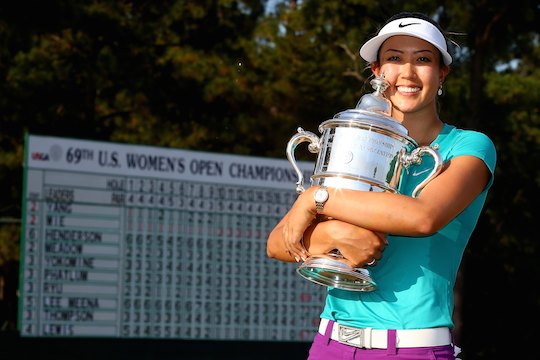 “I’m excited to announce the next phase of my career as I’ll be stepping back from playing on the @lpga_tour full time,” posted Wie West on Instagram.

“I’m so grateful for the past 14 years I spent on tour, traveling the world and competing against the best in the game.”

“I’m excited to spend more time now on projects that I always wanted to do but never had time for and to continually work to help golf become a more diverse and inclusive space.”

“Thank you guys for your support throughout every phase of my life/career, it means so much to me.”

Wie West’s LPGA career has been plagued by injury and like many players later in their careers, the motivation to do what it takes to get back on course is not as strong as it once was.

While she “only” won five LPGA tournaments including the 2014 US Women’s Open, Wie is understandably more than happy with what she has achieved over the past 20 years.

“I think if I hadn’t won the U.S. Open, I’d still be out there competing week to week trying to get that U.S. Open win.”

“Because I accomplished both of those [earning her Stanford degree and winning the US Open], I think I feel very happy in my decision now,” Wie West told Golfweek’s Beth Ann Nichols.

Now Wie, like Annika Sorenstam, Lorena Ochoa and others before her, have realised that there is more to life than golf…and more power to them.