Micheluzzi best of the Aussies at British Amateur

David Micheluzzi finished the best of the Aussies at the British Amateur Championship progressing to the quarter-finals before losing to Ireland’s Conor Purcell, 3&2 at Dundee in Scotland.

Nineteen Australians teed it up this year with the 36 hole stroke play qualifying series seeing Kyle Michel the top qualifier with rounds of 72-68 to finish in a share of 5th position along with fellow Victorian Blake Collyer. Micheluzzi qualified in a tie for 18th position at 3-over along with Will Heffernan. 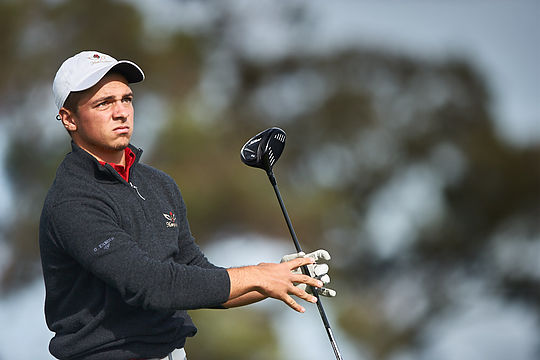 Ben Ferguson from Western Australia was the next best Aussie finishing in a tie for 25th position, with Jediah Morgan sharing 40th position along with Matias Sanchez.

Last year’s finalist, Dylan Perry narrowly missed qualifying after rounds of 75-73, in what would have been a disappointing result for him.

The first two elimination match play rounds had two Australians progressing to the round of 16, with Micheluzzi winning his second round match over Germany’s Max Oelfke and Blake Collyer accounting for Finland’s Eetu Isometsa.

Matias Sanchez went down in the first round to Sweden’s Eliz Svard, 1-down while Ben Ferguson lost to South Africa’s Malcom Mitchell in the round of 32, along with Will Hefferman who went 1-down to Scotland’s Stuart Easton. Kyle Mitchel also went down to Ireland’s James Suqrue on the 19th.

In the third round Collyer came up against Sweden’s Adam Blomme and was unlucky with his 1-down result. Micheluzzi, however, secured a stellar 5&4 victory over American Blake Wagoner to set up his fourth round encounter against Mexico’s Raul Pereda which he won 5&4 to progress to the Quarter Finals.

Micheluzzi was quick out of the box in his final match against Ireland’s Connor Purcell to be 1-up after two. However, a pair of bogey at the 3rd and 4th holes proved costly for the Australian and the Irishman took full advantage of the opportunity to move to 2-up at the turn before firing off birdies on the 11th and 12th to move to 4-up with six to play.

Micheluzzi won the 13th hole yet it would prove to be too little, too late with the pair parring the next three holes to see Purcell secure the 3-up victory.

The championship final saw South Africa’s Jovan Rebula completing a 3&2 victory over Irishman Robin Dawson in the 36-hole encounter at Royal Aberdeen to guarantee the 20-year-old a place in the next month’s Open Championship, as well as trips to the 2019 Masters and US Open.

Rebula is the nephew of Ernie Els and will join his famous uncle at Carnoustie in a fortnight for The Open.